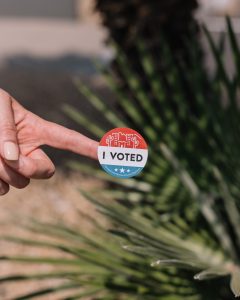 The 2020 election finally arrived this month and young voters were ready.

Only once in the last several decades have more than 50% of eligible voters between 18-29 voted in a Presidential election. That year was 2008, when 51% of young voters participated and the country elected President Barack Obama. In 2016, only 44% of young voters cast their ballots. This year, young voters busted out and not only vastly surpassed 2016 numbers, but also broke the Obama ’08 record.

According to Jumpstart partner Tufts University’s Center for Information and Research on Civic Learning and Engagement (CIRCLE), at least 52% and as many as 56% of eligible youth voters participated this year. Voter turnout also broke records overall with nearly 153 million voters across the country. Yet, most importantly, youth voter growth was larger than the growth of other age groups. In 2016, young voters made up 16% of the total vote share. In 2020, thanks to their huge jump in participation likely facilitated by more flexible early and mail-in options, voters between 18-29 made up 17% of the total vote share.

Thank you for voting! And if you’re in Georgia or have friends who are, you have one more opportunity to participate in this cycle, where the final two U.S. Senate seats will be determined in a runoff election on January 5. Be sure to register to vote here by December 7 and you can already request your mail-in ballot here.

Keep speaking your mind and taking control of your future!