Partners in Action: Teach and Care

Jumpstart’s Workforce Pathways program manager Addison Arnett can attest that their determination has paid off. “They have become a pillar of the community. It’s one of those places where you walk in, and it’s safe, and they treat you like a member of their family as soon as you walk in the door.” She continues on, “Everything they do is so thought-out. They’re very conscious of the area that they’re in and what those children need, even down to the healthy, fresh foods that they serve them. They care about everything that they do, and it shows.”

Jumpstart began its partnership with Teach and Care in early 2018. In Arizona, Jumpstart does not run its traditional program in which volunteers serve twice a week in preschool classrooms, but instead focuses on current early educators who are already working with children in underserved communities but lack access to professional development resources. In addition to receiving customized training, teachers who participate in Jumpstart’s Workforce Pathways program enroll in courses for college credit, receive ongoing support and coaching to improve their classroom practice, and learn how to integrate components of Jumpstart’s proven preschool curriculum into their daily lesson planning.

“I feel like I won the lottery when Jumpstart walked in here. I think Jumpstart is probably the best thing that’s happened to us,” says Anu. The majority of the Teach and Care staff do not have any formal education past a GED or high school diploma. This is not uncommon in Arizona; in fact, 41% of early childhood educators in the state have no education beyond high school (First Things First, 2013). Addison explains, “A majority of [the teachers we work with] have been working in the field for a very long time but have never found that right path to get more formal education, or they felt like it was too many hoops to jump through.” The system can be daunting, and other priorities can feel more pressing.

“…ever since Jumpstart has been involved, we’ve been able to get the staff really excited about getting educated in this field.”

“In the past,” Anu says, “I’ve always had teachers saying, ‘I’ve got three kids at home of my own. Sometimes I have to work two jobs.’ Encouraging them to get an education in this field was always a ‘no.’ But ever since Jumpstart has been involved, we’ve been able to get the staff really excited about getting educated in this field.”

Addison explains, “I think a lot of it has been a shift in their own confidence as teachers and seeing themselves as professionals. People always say, ‘Oh, I just work at a daycare. It’s not a big deal.’ And I tell them, ‘You have the most important job in the world!’”

Anu has already seen positive improvements at Teach and Care from the coaching and training she and her staff have received from Jumpstart. “The last course we did was on reading and how to be really creative when you’re reading a story to a child. I’ve been walking from class to class and I’ve noticed that the teachers are reading a lot more than they were before. And the style of reading is very different then what they were doing before. I see them pointing to words, asking open ended questions, using a lot more animation – things that were not happening before are really happening. They’re changing what they’re doing in their rooms.” 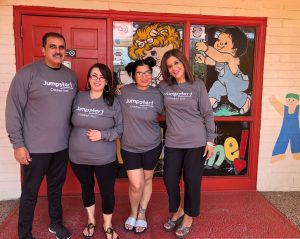 Anu also credits the Jumpstart program with instilling her with more patience, and with helping her to identify and ultimately fix a challenge that her staff had been experiencing. “The teachers had been telling me that mixing ages [having a combination of three-, four-, and five-year-olds together in the same classroom] had really been creating chaos for them. After I went through these Jumpstart courses, I decided to take my four- and five-year-olds and remove them from the three-year-old room. And I’ve noticed a huge difference in the learning, because now all the three-year-olds are learning at their pace. The four- and five-year-olds are doing theirs. And the teachers that have been participating in the Jumpstart program are able to really practice what they’ve been learning.”

The Jumpstart program not only builds teachers’ skills and confidence in the classroom, but also helps them access available resources. “We’re very lucky here in Arizona that the state has set aside a pool of money for scholarships for teachers who want to go to school.” Jumpstart helps teachers navigate the complicated scholarship process and community college system, setting them on a path for further professional development and education even after their participation in the Jumpstart program ends. This year, three staff members from Teach and Care have enrolled in programs to work towards their associate’s degree, and Anu is thrilled. “If the teachers are educated and know what to do, then we will see movement in what the children are getting with their day.”

Almost a year into the partnership, Anu cannot say enough good things about what Jumpstart has done for her center. “I am super, super honored to a part of the program.” Anu and her family are passionate about giving back to their community – not just through providing great services for young children at Teach and Care, but also by regularly bringing food to Teach and Care families and local homeless shelters, running an intensive after-school homework club for older children, and more. They can see clearly how Jumpstart is helping them reach their vision – skilled, educated teachers helping to develop healthy and educated children who will, ultimately, help the community in Mesa grow, succeed, and thrive.