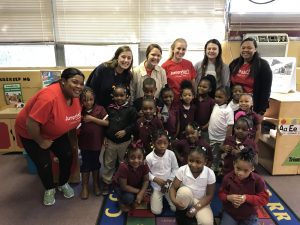 Jumpstart began its partnership with the McIntosh Blended Center in Okolona, Mississippi, in 2014, the first year the center offered preschool services. Sherunda Gates, one of the teachers at the McIntosh Blended Center, has been there since the start as well. “My favorite thing about Jumpstart is their willingness to help the children. Jumpstart is a great program — they work with the teachers and the children.” Angie adds, “The teachers at Okolona, they welcome Jumpstart and they love to have Jumpstart in their classrooms. They actually use the literacy activities that we implement in their classrooms even when Jumpstart isn’t there! And the children, they love Jumpstart too. As soon as the volunteers come in the door in their red Jumpstart shirts, the children get so excited. The teachers have told me that they ask every day, ‘Is today Jumpstart? Is today Jumpstart?’”

Angie speaks with great pride about the dedication shown by the volunteers from Ole Miss who serve in Okolona. “These Jumpstart volunteers are very committed to [the McIntosh Blended Center]. They have to get in the university van and drive an hour to serve! Two days a week, they leave here at 7:15 in the morning, drive an hour to Okolona, do their two-hour Jumpstart session, and then drive an hour back…. They have become very invested in Okolona and in preparing and helping these children.”

“Jumpstart has also helped me grow as a person because you have to have a lot of patience working with children! It’s helped me be grateful for the opportunities that I’ve had, and that I’m able to give back in this kind of way.” 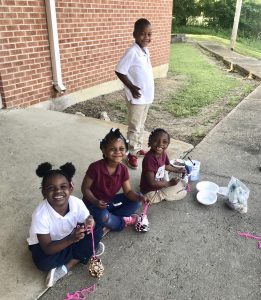 One of those dedicated volunteers is Maya Owens, a student at Ole Miss who just finished up her graduate degree in accounting. “All of the kids in that classroom really enjoy learning, and you can tell.” Maya says that one of the things she loves about serving with Jumpstart is that “lightbulb moment” you can see the children have: “when I realize that they are grabbing on to concepts. At the beginning of the year, we had kids that couldn’t spell their names or couldn’t recognize letters, and now they can. They know the letters and their sounds, and they’re very good with matching letters to words. Just seeing how they’ve grown throughout the school year overall is my favorite thing.” Not only does Maya love seeing the children grow, but she has seen the change in herself as well. “Jumpstart has also helped me grow as a person because you have to have a lot of patience working with children! It’s helped me be grateful for the opportunities that I’ve had, and that I’m able to give back in this kind of way.”

Angie explains that, this year, three of her Jumpstart volunteers have changed their majors because of Jumpstart to pursue a career in education. “Once they get into Jumpstart and understand that there is a need for us to prepare children for kindergarten in Mississippi, and they start seeing the differences they are making — they develop a vested interest in early childhood education and the relationships they form with the children.”

Jumpstart’s relationship with the McIntosh Blended Center is clearly a special one for all involved. “[The teachers] always say, ‘You’ve been here with us from the beginning, and we can see that Jumpstart really makes a difference in our children.’”