Our alumni spotlight series highlights stories from former Jumpstart Corps members as they reflect on their time with Jumpstart and discuss how the experience has served them in their current careers. Do you have a story to share? Want to make sure that you don’t miss any important stories or news for alumni? Join the Jumpstart Alumni Network to connect with fellow alum, stay connected to Jumpstart, and find new ways to stay involved in early education. 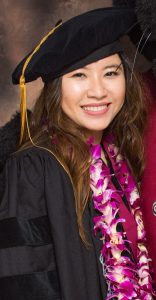 Was education important for you growing up?

My family came here when I was about 3 1/2 years old because my dad was a prisoner of war during the Vietnam War. He was imprisoned for over 10 years. After the fall of Saigon, he was released from prison and we took part in what’s called the Humanitarian Operation Program and this program enabled those who were prisoners of war to come to United States.

I think being immigrants, it was rough growing up. I was raised in a neighborhood that was pretty rough. I used to hear gunshots at night, and the neighborhood was known as the Orange County’s worst slums. Growing up, I remember you had two choices. You either became a young parent or you became a gang member. Those were the options growing up. In my adolescence, we moved out of that neighborhood. I went to a better school and then I was able to go to Cal State Fullerton.

I wouldn’t say that I was a good student. I think I was an okay student. I think I struggled in school. I remember my dad coming here struggling with post-traumatic stress disorder and not being able to find a job. My dad would stay home and he would actually help me a lot even though his English wasn’t strong. Regardless of any reading problems, he could understand the math and he would lay out items on our dining table to go over everything with me. He’s been a strong behind-the-scenes supporter in my academic career, supporting me emotionally, spiritually — through everything.

The folks that are in Jumpstart are compassionate, dedicated, and ethical people.

Why did you join Jumpstart?

I wanted to do something that was going to put my child and adolescent development major into effect. So I could utilize those theoretical studies and put them into practice. Thus, Jumpstart was perfect because not only was I giving back to the community, but I was also sharpening my skills in my academic field. I had so much support from my community growing up. We were all poor but we cared about one another and there was a lot of community; we had this sense of communal giving and taking care of one another. The folks that are in Jumpstart are compassionate, dedicated, and ethical people. They’re folks that were from all walks of life, all different colors, all different experiences, and we all worked together as a team for the benefit, again, for the community.

What type of work did you do between graduating from school and your current position?

After graduation, I went to grad school. I became a school psychologist and I worked a few years in a school district, and then I decided to pursue my PhD at the same time. Eventually, I decided to resign from the school district, and just pursue my PhD, and it was during this time, that I was presented with an opportunity to work with a non-profit, while working on my PhD. I ended up doing my research within the community I came from. I examined the experiences of Vietnamese mothers who have children with autism. Just to see how they come to make sense of autism and having a child with autism. So, I did research on moms, Vietnamese moms. Then, I was very lucky and fortunate to be given an opportunity to interview with the University of La Verne, and I got a position as an assistant professor on tenure track.

Do you feel like the experience you had in Jumpstart shaped you in any way?