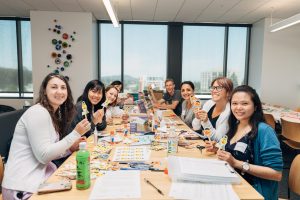 AUGUST 28 (SAN FRANCISCO, CA) — A ‘work party’ might seem like an oxymoron but not to the corporate volunteers from the Chan Zuckerberg Initiative (CZI), a philanthropic organization co-founded by Facebook’s Mark Zuckerberg and Dr. Priscilla Chan. In August, Jumpstart celebrated its first corporate volunteer event with CZI, a ‘work party,’ at their headquarters in Redwood City, CA.

CZI volunteers set out to assemble hundreds of Literacy Kits for the children served by Jumpstart in the Bay Area. The kits included the Sesame Workshop storybook, Book Buddies; a pair of Bert and Ernie puppets; and a “dream book” in which children can write their own dreams, just as Ernie does in the story. These Literacy Kits will be sent home with Jumpstart children to continue the lessons outside of the classroom and to give their families a way to become more engaged in their learning. 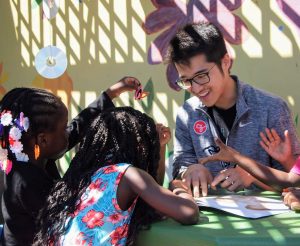 Later in the month, another CZI volunteer group joined the Jumpstart staff at the Felton Institute’s Dr. Martin Luther King, Jr. Center preschool in the Bayview district of San Francisco, where they implemented a Jumpstart summer program session. Volunteers read Juna’s Jar, by Jane Bahk, to small groups of children and facilitated insect-lab activities, which included the creation of butterfly art and building pipe cleaner insects.

Thank you to CZI for their contributions to Jumpstart and the children and families we serve.