Partners in Action: East Side House 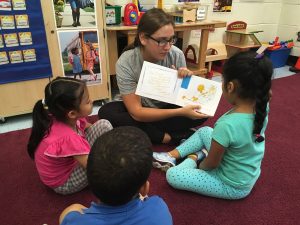 Jumpstart’s partnership with East Side House, a community-based organization in the South Bronx, began in 2016 with a new summer program for the center’s preschoolers. While this filled a critical gap in summer learning, Dawn Heyward, Deputy Director of Early Childhood at East Side House knew there was an even greater need for after-school services, especially for the four-years-olds enrolled in the Universal Pre-Kindergarten (UPK) program, whose school day ends at 3pm. After Heyward reworked her budget to include funding for an after-school program, Jumpstart collaborated with the center to create a new Extended Day program to provide high-quality early education to the center’s students after school hours.

In Jumpstart’s traditional program model, Jumpstart volunteers come to the classroom for two hours twice a week over the course of a school year. In the Extended Day program, Jumpstart volunteers visit the classroom four afternoons a week. These volunteers — typically college students pursuing a degree in education or alumni of Jumpstart’s traditional model at other centers — implement the Jumpstart Extended Day program, adapted from Jumpstart’s evidence-based language, literacy, and social-emotional curriculum, to support the skills that children need to succeed in kindergarten and beyond.

Jumpstart’s Senior Manager of New York Partnerships and Strategic Initiatives, Victoria True, has been thrilled to see the Extended Day program flourish at East Side House. “East Side is special because they’ve let us experiment with new program ideas. The Jumpstart Extended Day program provides higher quality intervention in the center to meet the needs of the classroom, and since the volunteers are there four days a week, they’re really a part of the environment,” says True. In the 2017-2018 program year, Extended Day expanded to serve four classrooms in East Side House centers, and both True and Heyward are excited to see the program continue to grow to six classrooms this fall. 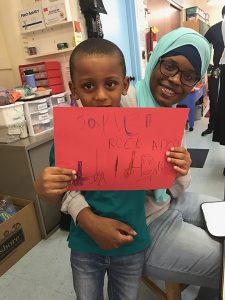 “It’s dual service,” says True. “We’re serving and working with the preschoolers, but we’re also developing and building a strong educational workforce and giving them significant experience in the classroom. The East Side staff really appreciate the volunteers; one Jumpstart volunteer was even hired as a teaching assistant.”

Jennifer Genao served as a Jumpstart volunteer first in one of Jumpstart’s summer programs and then in the Extended Day program at East Side House. She had hoped to find a program that aligned with her undergraduate studies in elementary education, and her sister, a former Jumpstart volunteer herself, encouraged Genao to serve. “I loved my experience in [my Jumpstart] classroom,” shares Genao. “I learned a lot about being a leader. During my last semester, I had to present a lesson plan to an elementary classroom. I knew some of my peers were nervous, but I overheard my teacher saying, ‘Jennifer’s so confident; she’s such a good reader,’ and I thought, ‘Thank you, Jumpstart!’”

“You can see that the investment in Extended Day services and in our partnership with Jumpstart have yielded a dividend in the preparedness of our students to move on and be successful.” 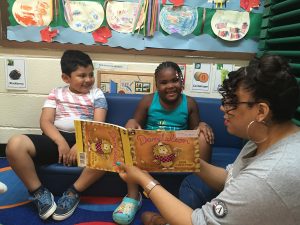 Heyward explains, “About 90% of our children are English language learners, and we thought about that when designing a program that would meet their needs. We knew that they needed more than just the standard number of hours and level of instruction, and that we needed to support the development of their native language…. I can’t say enough about the partnership, in terms of the leadership at Jumpstart, and how we’ve created this model together. I think that’s a really unique part of the partnership, that it was the marrying of our two visions to decide what the program was going to look like.”

It’s clear that the Extended Day program has made an impact on the East Side House teachers, Jumpstart volunteers, and the preschool children.  Heyward notes that when you walk by a classroom, you immediately see the students actively engaged in learning — and that, of course, is the heart of what East Side House and Jumpstart are all about.