For many, summer doesn’t typically conjure an image of school. Yet, summer is when some of the most critical learning can take place for our youngest students. In 2017, Jumpstart began providing summer prekindergarten transition programs in Atlanta Public Schools (APS) with our Community Corps team. This summer, we are serving at Cleveland Avenue Elementary, located in one of the most underserved neighborhoods of Atlanta, to a specially selected classroom of children. While Cleveland Avenue Elementary is new to the Jumpstart program, through Jumpstart for a Day (JFAD) and Read for the Record® events, the school is familiar with Jumpstart and was thrilled to have summer program this year.

Site Manager Cerrice Dawson explains what’s so unique about the children who are in summer program here, “Usually it’s more of an open-enrollment for summer classes. This year, it’s really special who they (APS) targeted for the program. They identified children through their preschool teachers, or chose those who have never attended preschool that need extra assistance, for a variety of reasons, to prepare them for success in kindergarten this fall.” 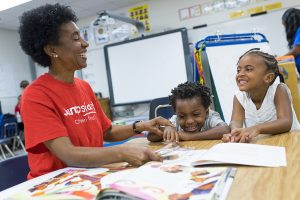 Whether from school absences, behavioral issues, or delays in their learning progress, this group of students was selected for summer program to ensure that they would be able to enter kindergarten ready to succeed. “Some of the children haven’t been to school before,” says Dawson. “This has been an important transition for them so that kindergarten isn’t so much of a shock.”

Through summer program at Cleveland School, Jumpstart is filling an important gap for these children who are entering kindergarten next month. And, the Jumpstart Community Corps team that teaches the weekly units have been a great support to both the students and classroom teacher, Ms. Essinita Mathew-Harris. Harris has been working in early care in Atlanta since 1998 and has asked her director to have Jumpstart in the school she teaches at during the regular school year. “Jumpstart is an extended family. When the children know that they have support beyond their family and regular teacher, it makes a difference.” Harris not only wants to bring the actual Jumpstart program back to her school-year classroom, but is also taking a few of the Jumpstart activities and readings back with her to use with her students in the fall. 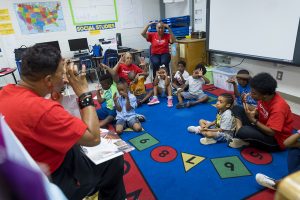 Over the past few weeks of hands-on learning, these weeks have been extremely important for the social-emotional learning and development of these students. Community Corps member, Ella Hayward, recounts the progress that one of the children has made in these short weeks. “I thought one child wasn’t listening and I was having a moment with him about raising his hand. I told him there was a procedure in place and we had to give our other friends a chance and if someone else raises their hand, even after his hand goes up, they might be called on first. Once he understood how to offer his answer in a respectful way, I found out that he was listening – he knew all of the answers to the questions I was asking – he just didn’t know how to participate in order alongside his classmates.” With this sort of self-awareness and understanding of how to interact in a classroom setting, students will be well-equipped to handle a more formal kindergarten classroom and learn alongside their peers.

Harris also notes how special it has been having the Community Corps team. Community Corps members are adults from the surrounding community who provide the Jumpstart program just as our college-age volunteers do, but with the added element of intergenerational relationship building. “When they experience the love and affection from the older educators it settles them down a whole lot more. Our Jumpstart friends always calm them down,” says Harris. With extra hands from the Jumpstart team, the ratio of adults to children decreases and provides the students with more one-on-one support that impacts their learning and ability to progress.

“Jumpstart nurtures the children through their personal and academic difficulties. They need help transitioning from home to a new place and environment. Jumpstart is able to provide structure and nurturing support.” — Ms. Harris 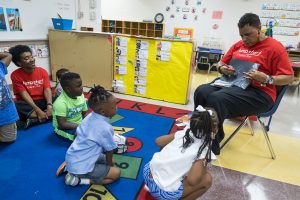 And our Jumpstart Community Corps also see the impact of the program in their own lives. Hayworth has been serving with Jumpstart for six years and not only finds the program personally rewarding but also wishes it had existed years ago. “At the end of the day, when I know I’m helping someone and I see their progress, it’s a warm and good feeling all over and I’m ready for the next Jumpstart day. And I wish we had this when my son was growing up, it would have helped him tremendously, but I am so glad they have this program in place now.”

Images are from another Jumpstart summer program classroom with Atlanta Public Schools.