June 14, 2018 (LOS ANGELES) — Last month, Jumpstart hosted an Alumni Panel for graduating Jumpstart Corps members at UCLA and welcomed them to the Jumpstart Alumni Network. The panel, made up of recent Jumpstart alumni from the area, shared insight from their post-college careers and how their time at Jumpstart helped shape their experience. Below is a snippet from their conversation.

How has being part of Jumpstart helped you after you graduated? Did you develop soft skills, professional skills, or any other skills?

Ozzy: You learn to communicate with different teams, different personalities, different work styles and settings. From your team planning meetings at Jumpstart, you learn how to set your schedule and go to the classroom early in the morning or sometimes stay really late.

How has Jumpstart made an impact on you?

Ozzy: Being in Jumpstart really defines some of the relationships that you will build during your time at school. One day, a student’s mother came in and told me that her son doesn’t act like this with anyone, with any other adult. He doesn’t talk to anyone else. He goes home and only talks about what he did at Jumpstart, what he was doing with you. And it’s like you’re part of the family for him.

Jamie E: As Corps members, even though we had finals and midterms, you had a team to support you. And if somebody was struggling, everyone was struggling. We were all struggling to get up in the morning. So just having that bond and that network with this group of people made it special.

Jamie C: As a teacher now, it’s so rare to get so many adults in one room with kids; especially adults that are spending so much time to make this hour or two really, really special for the kids. It brings so much joy. The Jumpstart sessions make the classroom so enjoyable, which is kind of hard nowadays in school.

Any advice for graduating seniors?

Andrew: Two pieces of advice: one, remember you’re all on your own timeline. It’s not a race, so don’t compare yourself to your friends on social media. I’m saying this right now and when people said this to me when I was graduating I just thought, I’m still going to do that. The sooner you realize that you are on your own path and that you’re not in competition with anyone else, the sooner you can be happier.

Jamie E: I went into the retail business and it didn’t work out. I hated it, and I stuck it out for six months, and then I felt defeated. I focused all my energy on getting this awesome position, and then I left. So it’s okay if your first position doesn’t work out; just remember the feeling you had when you were in Jumpstart or when you did something that made you happy and make sure you find that in your next position.

Kortney: Understand the value and the importance of life at this moment, but also make sure to really sit down and realize what it is that we’re living for. What is your purpose in life? That’s a difficult question, and it might always be ongoing and changing, but at the core, ask yourself, What are my values? What do I really need to fight for? 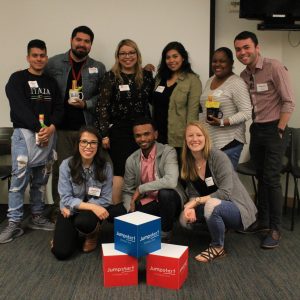 One, five, or ten years after graduation, our Jumpstart alumni are continuing to make a difference in the world, carrying with them the lessons they learned during their service with Jumpstart. From working to address diverse needs in a classroom to effectively serving as part of a team, Jumpstart experiences in and out of the classroom helped to prepare this Alumni Panel for rewarding careers in their fields. We look forward to seeing what the next class of Jumpstart alumni will accomplish!