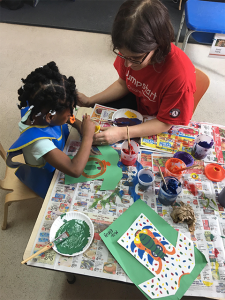 Jumpstart Central Connecticut State University (CCSU) has been serving at the vibrant YWCA in New Britain, Connecticut for 6 years and has a strong relationship with the center through CCSU’s Office of Community Engagement. The YWCA’s Co-Director Michele Eathorne has been at the center five of those six years and has seen the program grow and evolve over time.

“At the beginning it was all new,” says Eathorne. “We worked with the site manager and teachers tweaking here and there to see how we could support Jumpstart or how the teachers could help to make things easier in transition from the Jumpstart lessons back to normal classroom.”

Eathorne and the center teachers have seen the most value in the Jumpstart program with the increased ability for teachers to reflect on their own classroom’s learning. “What’s wonderful about Jumpstart is that our teachers are given the time to be the observer in the classroom on their students’ progress.” The Jumpstart team at YWCA is committed to the partnership and also supports the teachers beyond session, by bringing extra materials or helping out during regular class time before or after session.

“The Corps members realized that they were able to contribute to something larger than a simple gift, they started this child’s first at home library!”

Furthermore, the teachers at YWCA have noticed how the Jumpstart Corps members encourage an accessible learning atmosphere in the classroom. With preschool classrooms that have age ranges of 3-5, Corps members have worked carefully to scaffold activities and make sure each child can participate and learn especially during small-group activities. “The children are benefitting from smaller groups during session because the members provide the children with increased one on one attention and introduce the children to new games and concepts that they haven’t encountered before,” reflects Eathorne.

For the YWCA it is as much about learning as it is about community building. Every few months the center hosts a family night, festival, or field trip to engage the students and their families with the local community. With many Jumpstart Corps members often volunteering at these events and getting the chance to engage with the families of their partner children, it’s no surprise that some Jumpstart alumni are now staff at the YWCA – making Jumpstart even more connected to the center! 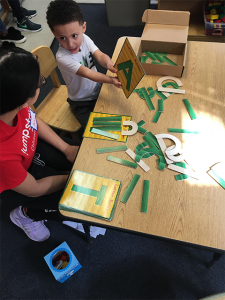 This year, the Jumpstart team decided to create more take-home literacy kit materials for the students. “The children can share what they learn with Jumpstart and have the opportunity to do more homeschool learning with their families,” explains Eathorne. The literacy kits include a storybook, writing book, box of crayons, and resources for engaging families on the importance of reading with their children. At this spring’s Jumpstart for A Day celebration, the Corps members leaned how valuable the take-home materials had been when a family at the event approached them and spoke about how helpful the literacy kit had been.  “The Corps members realized that they were able to contribute to something larger than a simple gift, they started this child’s first at home library,” said Site manager Pauline Galezowski.

Special moments like these have made the Jumpstart team an integral part of YWCA and have made them love building relationships with their partner children even more. At the end of this year, the YWCA Jumpstart team gave each classroom a framed photo of the whole class pictured with Corps members and teachers. Eathorne knows how special this is for the children, “the photo is displayed for everyone, including families, and they really like that. The kids love looking at the photo and they can reflect on it, talking about their time with their Corps member partners.” Each year Eathorne is thrilled to see the Corps members enjoy their classroom experience, learning through their teaching moments with the children. She sees the partnership with Jumpstart as a crucial opportunity for both the members and preschool children.