Stereotypes and Positive Change – Gender Roles in a Jumpstart Classroom

Aniqa Miazi is a Jumpstart Corps member at St. John’s University serving at a preschool center in Queens. 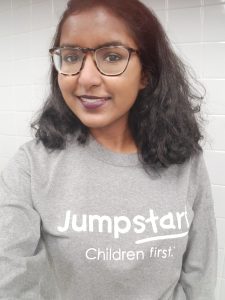 I want to start off this reflection with a confession: I could not have imagined before this year that I would ever be working in a classroom. While I have always loved children and had lots of fun playing “teacher” as a child, I do not think anyone could have guessed that I, Aniqa, the introverted, calm — and sometimes grouchy! — person, could find joy or success in a classroom full of three-year-olds. Considering that I am pursuing a career in the health sciences, I did not anticipate that I would ever find myself in such a situation, but a close friend presented Jumpstart to me, and the rest is history. I am glad to say that within the past several months serving with Jumpstart in Queens, New York, I have learned a tremendous amount — not only about young children and how to engage and educate them, but also about myself.

There is a little girl in my classroom, Kiana. She loves to dress up in the puffy blue Cinderella dress and carry her shiny little purse and play “princess” with the other girls in the Dramatic Play center. During one of our recent Jumpstart sessions, however, she had taken a particular, newfound liking to the firefighter vest and construction worker hat. Up until that day, those things were pretty much never worn by any of the girls in the class; I had only seen the boys using them. I was glad to see that, as a little girl, Kiana could see herself as a firefighter or a construction worker, so I helped her put on the vest and encouraged her to “Save the baby in the fire with your fire hose!” — as I routinely do with the boys.

Kiana was happily putting out fires and pretending to rescue her friends when the boys in the center approached her, giggling. “Girls can’t be firefighters! Or construction workers. Those costumes are for boys.” I puzzled over what to do. Finally, I decided that instead of admonishing them, I would simply explain clearly to them why they were wrong. “Girls can definitely be firefighters and construction workers just as easily as boys, because girls are also brave and strong! Girls can be whatever they want to be.” They did not look very convinced. “I’ve never seen a girl firefighter on TV before,” said Evan, skeptically. “Even still, they definitely exist,” I reassured them.

I was reminded of how powerful media’s influence is and that representation of all types of people in the media is so incredibly important.

Even though I understand that these children are only three and four years old, the whole episode upset me. It made me realize how, even at such a young age, children are already influenced to believe so strongly in gender roles and stereotypes. Young children are so impressionable, and I wish that these children were more actively being taught that girls can be as strong and brave as boys. I was also struck by the power of representation, knowing that Evan did not think girls could be firefighters or construction workers because he had never seen one on television or in any cartoons. I was reminded of how powerful media’s influence is and that representation of all types of people in the media is so incredibly important.

I will use my opportunity with Jumpstart to help the children in my classroom to become as open-minded and understanding as possible.

I am very proud that Kiana did not take anything to heart and simply kept on putting out her pretend flames. I am hopeful that she will continue to be a free spirit and keep exploring her interests without paying attention to gender stereotypes — a hope I have for the rest of the girls in my class in the Bronx too, and for all the girls that Jumpstart serves. During the rest of my time as a Jumpstart Corps member, I will continue to encourage little girls to be whoever they want to be and teach little boys that girls can do the same things that boys can — just like they, the boys, can do anything they want too, no matter the stereotypes or current gender norms. I will use my opportunity with Jumpstart to help the children in my classroom to become as open-minded and understanding as possible. Instead of being upset that children have already been exposed to stereotypes, I am motivated and excited to help influence a positive change.

Sometimes, in the midst of some classroom chaos, it can be hard to feel confident that the children are actually learning anything from us. Somedays it can seem like we are not making any kind of real difference. But, through my experience with Jumpstart, I have come to understand that true growth is almost always incremental and takes consistent, careful support. It can be hard to see it day-to-day, but now I know: we are making more of a difference than we realize.