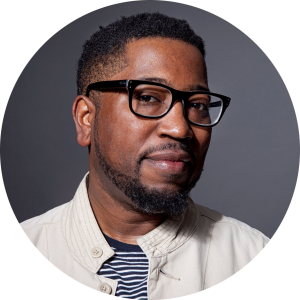 Scribbles to Novels celebrates the power of the written word while raising funds to support Jumpstart’s programming. Our Scribbles to Novels gala in Boston will take place on May 9th and will feature award-winning poet Major Jackson. In today’s blog, we speak with Jackson about the art of writing and the mentors and inspirations that led him to become a poet.

What is your favorite part of the creative process?
The most difficult aspect of writing is leaping into the opening sentences or utterances. However, once the train has left the station, so to speak, and I am midway through the journey, recording the phrases and images that make up my interiority, and well deep in the cocoon of myself, I am most free.

What was your favorite book when you were growing up? Favorite poem?
I was a reader of Encyclopedia Brown [Donald J. Sobol’s boy detective series], and my favorite poem in high school was Langston Hughes’s “Theme for English B.”

When did you realize that you were a poet?
Much of my relationship with language began first at home (good southern folk living up north with a penchant for colorful speech), then in school of course (I had teachers who would shiver reading passages of Shakespeare and Robert Frost), and then among my friends, most of us, sharing our raps in the cafeteria. Somewhere along the way, I started writing poetry as a fun, nascent activity. At that time, I never thought of becoming an actual writer; I was happy with simply the act itself. The idea of becoming an actual writer came later when communities of other artists started to emerge around me (dancers, musicians, and painters in Philadelphia who were connected in one form or other to the Painted Bride Art Center) and among them aspiring poets and fiction writers. Later I would join The Dark Room Collective, a group of writers who were very serious about being published. When I first published a poem in a city newspaper, I realized then that this was my life.

What was your first poem about?
I was in high school, listening to music that reflected a deep concern with the world and one’s place in it and that also encouraged a lot of brooding. I do not remember my first poem, but I am sure of its tone: one of immense teenage angst and longing.

Did you have a teacher or mentor who inspired you to become a poet?
I have too many people to name in this regard, rather than one single teacher, including the poets Garrett Hongo, Sonia Sanchez, Yusef Komunyakaa, Sharon Olds, Marie Howe, Mark Doty, Essex Hemphill, and many more. My teachers at Central High School in Philadelphia passionately believed in literature and language as a way to give texture to our lives that the sciences failed to fully encompass. One of them, Mr. Plummer, would recite whole passages of Frost and Milton. They modeled a passion for poetry that I found infectious. However, my mentor and professor from Temple University, the great poet Sonia Sanchez, helped me realize the power and reach of poetry that is intentional in its ability to change consciousness and impact the world with one’s words for a greater good.

There is a growing understanding that we need more diverse authors offering more a wider range of viewpoints and experiences to create literature that resonates with everyone, and this is especially true with books for young people. What else do you think we, as a society, need to do to make books and poetry more accessible, and what do you see as your role in contributing to this?
A diverse canon of writers is essential to envisioning a world where none are left behind. Cultivating young people to become readers allows them to cross boundaries of difference, whether geographical, cultural, racial, or economic. Literacy allows us to crush the effects of fear. With poetry, one encounters a voice, a speaker who gives a portrait of their thoughts and possibly their feelings. However, we need to find a way for people not to fear poetry, the interiority of others, or the voice within themselves. That is the true lesson of poetry; it gives space to hear one’s self. As Walt Whitman phrased, that “Song of Myself.”

What do you love most about being a professor?
On one hand, I get to inspire students to not only appreciate the great works of literature but also empower them to contribute their own efforts and add their own lives and experiences to the grand conversation of what it means to be human. I guess that is one of the differences of our education, that we were simply escorted through the canon of great authors. No one said you could be among them until much later.

At Jumpstart, storybooks offer a way to connect with preschoolers and to build their language and literacy skills, helping prepare them for kindergarten. Why is reading and early literacy important to you?
Early literacy and reading begin the journey towards a wider world in which children feel connected to each other and to the larger world which awaits their uniqueness and their own burgeoning stories.

Join us for the Scribbles to Novels gala in Boston on Wednesday, May 9, to meet Major Jackson and our other featured authors, including bestselling author Ace Atkins, debut author Karen McManus, Fancy Nancy author Jane O’Connor, and prize-winning poet Sandra Lim.