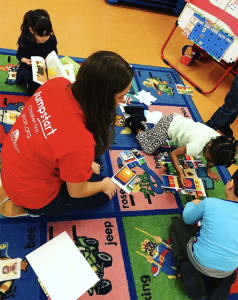 The Elizabethport Presbyterian Center, known to locals as “EPort Center,” has been providing support to the families of Elizabeth, New Jersey, since 1965, and the Center’s Early Childhood Development Center is a model program for organizations across the state of New Jersey that work with parents in the development of young children.1 The Elizabeth community is home to a large Hispanic population and 75% of EPort Center’s students are dual language learners. The Center helps support these students by placing either a teacher or aide who speaks Spanish in each classroom. Multicultural pride and appreciation are a big part of the EPort Center environment, and the teachers work hard to not only teach their students, but also include children’s families in the understanding and celebrating of each other’s cultures.

Every day at EPort Center starts the same way — teachers begin with a morning message describing what their preschoolers can expect that day, what they’ll be learning, and when they’ll have lunch and naptime. On Tuesdays and Thursdays, the students excitedly await the news that their “Jumpstart friends” will be joining them! The Center prides itself on providing a welcoming atmosphere for the students and staff, and the Jumpstart Corps members from nearby Kean University have become an enthusiastic part of the EPort family this year.

Donna Scott has been the Early Child Care Director at EPort Center for over 20 years and a teacher for almost four decades, and she can see the impact Jumpstart has made on the children since the program started in October. With an emphasis on the same language and literacy skills that the EPort Center’s curriculum covers, Jumpstart has been a great extra support for the students’ learning and development.

The EPort Center teachers sometimes re-read the Jumpstart core storybooks in Spanish after Corps members leave, supporting their dual language learners with a second reading. When session resumes on Thursdays, children eagerly offer answers to the questions they weren’t ready for earlier in the week.

The children at EPort Center love spending time with their Jumpstart friends. Many Jumpstart teams sing the “Goodbye Jumpstart” song at the close of each session, but, at EPort Center, they do something different and also sing “Hello Jumpstart” in the beginning to get ready and excited for their time with the Corps members. Whether working with the children one-on-one or in groups, Jumpstart Corps members help provide a secure environment for learning how to work both independently and cooperatively with their peers. Scott mentions how the Jumpstart program also teaches students “how to be a graceful winner and loser. Even if you give a wrong answer, you’re still a winner, because in our curriculum there are no losers. The Corps members reinforce [this], so no child feels like they lose if they’re wrong.”

The Corps members’ dedication to the preschoolers and the extra effort they put into session — like the Corps member team that created aprons for their whole classroom when reading The Little Red Hen (Makes a Pizza) by Philemon Sturges — has blown the teachers away. Scott also greatly appreciates the opportunity for her students to interact with new and different faces, and especially the opportunity for the children to have male role models to look up to in their Corps member friends, since the vast majority of the Center’s staff is female. 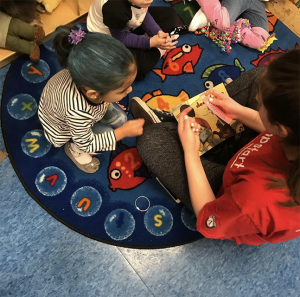 Kean University was recently awarded an AmeriSchool distinction by AmeriCorps (see the video below), in recognition of the impact Jumpstart has had on the community. The award has also increased awareness of the Jumpstart program on the Kean campus. Kean’s Jumpstart site manager, Michelle Zuzock, shares, “The AmeriSchool distinction really shows how important service is to the Kean students who serve in the preschool. Personally, to be a site manager of a site so committed to giving back to the Elizabeth community is remarkable. A lot of them are from the area, and that’s exactly why they’re trying to give back to the community; they know what it’s like to learn and grow here and are committed to giving back.”

EPort Center is a special place for its students and faculty, and the Jumpstart Corps members who serve there are absolutely a part of the family. “I would encourage Jumpstart for any early childhood program,” says Scott. “As a director and former teacher, when you hear that a new program will be implemented, it may seem like a lot [to manage], but the Jumpstart program will fit into any early childhood curriculum.”