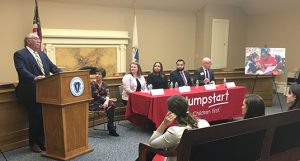 Jumpstart recently held a briefing at the Massachusetts State House to raise awareness about Jumpstart’s impact on children and families in the state and seek support for a budget amendment to support our programming in Massachusetts. The briefing included a panel moderated by Naila Bolus, Jumpstart President and CEO, and included: Jamie Buskey, Program Director for ABCD Head Start; Elizabeth Meca, mother of a child in Jumpstart programming; Gil Alzate, alumnus of Jumpstart’s program at the University of Massachusetts Boston; and Dr. Mark Wagner, Director of the Binienda Center for Civic Engagement at Worcester State University.

The following article is reprinted with permission from the State House News Service.

STATE HOUSE, BOSTON, FEB. 27, 2018 — Elizabeth Meca of Dorchester remembers one of the points when she realized a unique educational opportunity was helping her four-year-old daughter, Olivia.

Olivia grew her literacy skills last year with the help of a volunteer from Jumpstart, a program that recruits more than 800 Massachusetts college students and adults to enhance early education opportunities for low-income students in Boston, Brockton, Lawrence, Lowell, Somerville and Worcester.

“They come through the door and they’re like superheroes.”

“They come through the door and they’re like superheroes,” Meca said at a briefing at the State House on the program, which is seeking $500,000 in state funding this year. 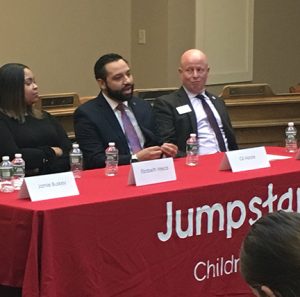 Gil Alzate served as a Jumpstart volunteer while attending UMass Boston after serving in the U.S. Marine Corps, and said the program helped him continue to serve as he transitioned from the military to civilian life.

“It was definitely interesting to go into the classroom – being a Marine and all stoic – and now I’m reading this book and being all playful,” he recalled.

“What really stands out to me is the importance of giving back to your community,” added Alzate, who is now pursuing his MBA at Babson University.

Rep. Jim O’Day of West Boylston, who plans to push for Jumpstart funding during this spring’s House budget debate, said the importance of early education became “very clear” to him during his 25 years as a social worker at what was then called the Department of Social Services.

Reaching children early with literacy and social programs pays long-term dividends, including reduced poverty and incarceration rates, O’Day said, recalling his time as a social worker when he encountered children between the ages of 2 and 4 who had no social interaction and very little guidance.

“There is a small piece of our population that we lose,” he said. “I mean we just lose them at a really, really early age and it’s painful and it’s sad and it’s a whole bunch of negative things.”

O’Day told Jumpstart supporters they have an ally in Education Committee Co-chair Rep. Alice Peisch. “I know that she wishes she was here,” he said, noting Peisch was attending memorial services for Rep. Peter Kocot of Northampton, who died last week. 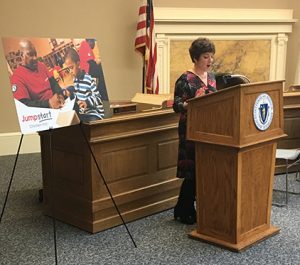 Additional funding could help Jumpstart expand into Chelsea and New Bedford, Jumpstart President Naila Bolus said, and help the state address the fact that only 47 percent of Bay State third graders were reading at grade level based on the 2017 MCAS. The numbers are lower for economically disadvantaged students (30 percent) and black children (29 percent) and Hispanic/Latino students (29 percent), according to Jumpstart.

“Here in the Commonwealth the future of education is about equity,” Bolus said. “We have the best schools in the country, some of the highest performing districts, and yet we have a persistent achievement gap and we have some of the worst literacy rates in the country.”

“Here in the Commonwealth the future of education is about equity,” Bolus said. “We have the best schools in the country, some of the highest performing districts, and yet we have a persistent achievement gap and we have some of the worst literacy rates in the country.”

Headquartered in Boston, Jumpstart operates in 14 states and organization officials say there’s a demand for expansion, but a need for funding to do it.

Dr. Mark Wagner, director of the Binienda Center for Civic Engagement at Worcester State University, said 110 students there have gone through Jumpstart in the past three years, providing great training for early education students as well as students studying other topics.

“It’s turning our students into leaders,” he said. “That’s bigger than something on a resume.”