The Importance of Diversity and Inclusion in Children’s Books 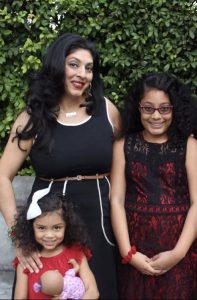 Jenessa Flores Parker is an alumna of Pitzer College, where she is now the Jumpstart site manager. She received a master’s degree in Community-Engaged Education & Social Change at Claremont Graduate University (CGU) and is currently a PhD student in Teaching, Learning & Culture at CGU. And, most importantly to Jenessa, she is mother to Elliah (11) and Ahlima (4).

I was born in El Centro, California, right on the border of Mexicali and California, and I spent most of my childhood crossing back and forth across that border with my grandparents. In our hometown there was a library that I would visit at least once a week, and it became a sanctuary for me. It was here that I was able to escape and read about faraway places and people I yearned to meet, yet up until that day I had only read about people who were literally nothing like me.

One day, the librarian said to me, “Te vas a encantar este,” as she handed me a book: The House on Mango Street by Sandra Cisneros. As I stared at the blue cover, I saw images that looked like my mother and me, and I was so excited to find out what the story was about. The librarian shared that she had put the book aside because she thought I’d love it. I went home and read that book so fast. I was immediately entranced and must have read it over 100 times that week. For the first time, I had found a book with characters who felt like family, who looked like me.

When thinking about the importance of celebrating diversity through books, I get overwhelmed with emotions. I think of my two beautiful daughters who are biracial (Black and Chicana) and how they beam when they talk about themselves. As parents, their father and I have created a home that embraces both of our cultures. We have worked diligently to create a space in our home that has an abundance of books that feature strong, imaginative, game-changing people of color as lead characters — something that neither he nor I experienced on a regular basis growing up.

My girls have been given a window to look out into the world and find similarities that no longer separate them from the majority of characters that are written about. They are Brown, they are Black, and they are proud. We need to challenge ourselves on a daily basis to be mindful of the importance of inclusivity, to make space for everyone to feel safe and recognize that oftentimes people of color have been left out of the narrative. Thinking about my role, not only in Jumpstart but as a part of society, I feel that it is part of my civic duty to bring books into the classroom that empower children. Books that give them a sense of pride, and, more importantly, advocate that their voices and stories be heard and validated.

In the preschools in my Southern California community, 95% of our students are children of color, yet we have very few books with diverse characters. I find myself having the same conversations over and over with my Jumpstart team leaders and Corps members about how to make direct connections with our preschool children. I decided to start bringing in my own personal collection of books to share with our classrooms. These books celebrate our differences: some are written in Spanish, some tell the stories of great men and women of color (Jean-Michel Basquiat, Cesar Chavez, W.E.B. Du Bois, Frida Kahlo, and Jackie Robinson!), and nearly every one of the books has characters that look like the children in our classrooms.

It was with one simple book that the barrier was broken. The book not only allowed us to hear her voice for the first time, but it also showed her that we respected her native language.

I’ll never forget the time when one of our children actually said something for the very first time. “Soy como yo!” she exclaimed. It is amazing how such a simple phrase can change your entire year. Anaiis had been in our Jumpstart program for six months and never said word, despite our Corps members’ attempts to include her during each session. When she finally found the courage to speak she said, “She’s just like me!” as she pointed to the little girl on the cover of Lola En La Bibloteca by Anna McQuinn. It was with one simple book that the barrier was broken. The book not only allowed us to hear her voice for the first time, but it also showed her that we respected her native language. This simple gesture empowered her to move from the corner she normally hid in during session, and, for the very first time, actively participate in the classroom. Her Jumpstart partner played an incredibly pivotal role in Anaiis’ life and, after that breakthrough, the two became very close for the duration of the school year.

Every child should have the opportunity to see themselves in a book. As we enter the second half of Black History Month, I encourage everyone to take advantage of their local bookstores and websites like Teaching Tolerance to learn more about why diversity is so important in children’s literature. Seek out diverse stories and authors to share with your children: they will serve as mirrors to their own identity and offer windows into other cultures and ethnicities.

Inclusion and diversity are things that people often back away from in conversations with one another. But why should we be afraid to address race? Why shouldn’t we celebrate who we are and where we come from? Children learn tolerance through what they see and hear; the sooner we incorporate diversity with honor, the sooner we create a world that respects and embraces all races and cultures.