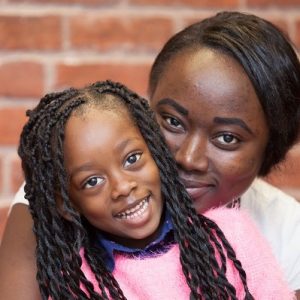 Every Tuesday and Thursday, a small group of Jumpstart Corps members, preschool children, and their families come together for dinner at Urban Edge, an affordable housing organization in Boston. Corps members and parents spend time together over a meal, getting to know each other in a way that is almost never possible in a traditional school day setting. After dinner, the parents — primarily single mothers — go off with a parent educator to have discussions about parenting, including child development, strategies for handling difficult behaviors, and techniques for supporting and nurturing young children. While the moms build their knowledge together and grow their support networks, the children and Corps members are busy too. Corps members spend the time after dinner implementing Jumpstart’s proven curriculum with the children: reading, exploring, and developing the key skills children need to succeed in kindergarten. At the end of the evening, parents join back up with the group, and participate in the final activity of the Jumpstart session: Sharing & Goodbye, where children talk about what they learned and enjoyed most during that day’s session.

The program is truly something unique and special. “We’ve really seen both parents and children making progress, and when they can both make progress at the same time, it makes so much more of an impact,” shares Jumpstart Site Manager Kim Monaco, who manages the Urban Edge program. “This last year, there were two brothers in the classroom who displayed a lot of challenging behaviors. A Corps member, Manny, took them under his wing; he started spending more intentional small-group time with them and reading to them two-on-one. These were two boys who initially only responded to yelling, because that was the technique that was most used with them. By the end of the year, their mom told me, ‘The boys are learning how to act, and I’m learning how to reach them.’”

“It’s an incredible way for Corps members to grow, especially those who want to be teachers. They have to take control, set expectations, and figure out how to navigate everything with the children they’re serving.” 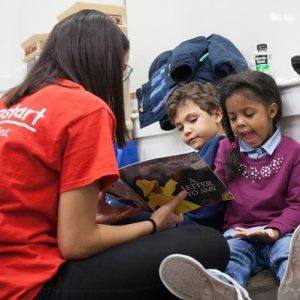 For a number of the children participating, this program is their first exposure to a school setting, and so their Jumpstart Corps members – all of whom are community college students or community members — become the children’s first teachers, providing the introduction to their academic career. Kim explains, “It’s an incredible way for Corps members to grow, especially those who want to be teachers. They have to take control, set expectations, and figure out how to navigate everything with the children they’re serving. They become more independent and learn more problem-solving skills because they have to figure out so much on their own.” Valerie, last year’s team leader, is a prime example of this. When she first joined Jumpstart, she was a community member just looking for a way to volunteer in her neighborhood; after participating in the Urban Edge program at Jumpstart, she has decided to go back to school for her master’s in early childhood education.

Through this multi-faceted collaboration with two long-standing local organizations, Jumpstart has found a new way to help communities thrive by supporting the development of strong, successful children and families.