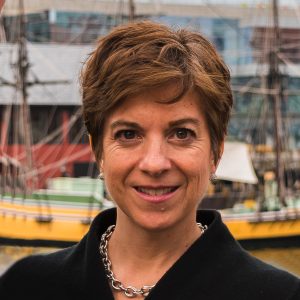 I am some 36,000 feet above Wyoming, zooming across the country at a ground speed of 585 miles per hour as I write this. I can see faint, twinkling lights below, but mostly it’s dark, and I am reminded, as I often am when I fly, that our country is so incredibly vast. I know that sounds obvious, but there is something about seeing it from above, with all its beautiful and diverse topography, that fills me with awe. There is room – big, open, welcoming spaces – for so much here.

That promising picture seems an apt image for the legacy we honored earlier this week on Martin Luther King, Jr. Day. It was a day of reflection and service that empowered individuals, strengthened communities, bridged barriers, helped forge solutions to societal problems, and moved us, perhaps, closer to Dr. King’s vision of a “Beloved Community.” And this year’s MLK Day, following the vulgar, hate-filled conversation on immigration of the past week, took on a kind of “fierce urgency.”

As I look back on the day now, and how I experienced it, I see that it was punctuated by three important moments of learning – one in the morning, one in the afternoon, and one in the evening – and that the combination of these moments challenged me with a new perspective on how I might help honor Dr. King’s legacy.

“Ours is a time of almost daily jaw-dropping astonishment and often righteous rage… Yet, I urge you, ask you, gentle you, to please not spend your spirit dry by bewailing these difficult times.”

In the morning, I received a message from a dear colleague along with a reading – excerpts from poet, psychologist, and author Dr. Clarissa Pinkola Estés’s “Letter to a Young Activist During Troubled Times.” Estés wrote it years ago, but on MLK Day her words rang with a clear relevance to our current times: “It is hard to say which one of the current egregious matters has rocked people’s worlds and beliefs more… Ours is a time of almost daily jaw-dropping astonishment and often righteous rage… Yet, I urge you, ask you, gentle you, to please not spend your spirit dry by bewailing these difficult times. Especially do not lose hope. Most particularly because, the fact is – we were made for these times… I cannot tell you often enough that we are definitely the leaders we have been waiting for…” Yes, we are – and I am more convinced than ever of that fact as I travel throughout the Jumpstart network, hear stories, and watch with admiration as staff and volunteers push determinedly towards our vision. 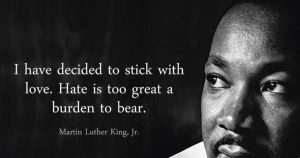 In the afternoon, after my family returned from a service project, I asked my children what was their favorite Martin Luther King, Jr. quote. They agreed on one they had found and posted on our fridge some months back: “I have decided to stick with love… Hate is too great a burden to bear.” It is from a speech he gave in August of 1967, in Atlanta, at the 11th Annual Southern Christian Leadership Conference Convention. I read the whole speech, and even found a clip of the final 15 minutes. The full paragraph reads as follows: “And I say to you, I have also decided to stick with love, for I know that love is ultimately the only answer to mankind’s problems. (Yes) And I’m going to talk about it everywhere I go. I know it isn’t popular to talk about it in some circles today. (No) And I’m not talking about emotional bosh when I talk about love; I’m talking about a strong, demanding love. (Yes) For I have seen too much hate. (Yes) I’ve seen too much hate on the faces of sheriffs in the South. (Yeah) I’ve seen hate on the faces of too many Klansmen and too many White Citizens Councilors in the South to want to hate, myself, because every time I see it, I know that it does something to their faces and their personalities, and I say to myself that hate is too great a burden to bear. (Yes, that’s right) I have decided to love.”

We don’t often talk about love as the foundation for the work we do at Jumpstart, but Martin Luther King, Jr. challenges us to. In his Letter from Birmingham City Jail, he talks about being “extremists for love.”

I was thinking about all of this on the way to the airport that evening, when I heard a familiar name on NPR’s All Things Considered. Matt de la Peña − former guest author at Jumpstart’s Scribbles to Novels in New York, and Newbery Medal winner for his book Last Stop on Market Street − was being interviewed about his new book, called… Love. The book is illustrated by Loren Long, whose Little Engine that Could inaugurated Jumpstart’s Read for the Record, and whose book, Otis, was the Read for the Record book in 2013. In the interview, de la Peña said he was motivated to write something for his three-year-old daughter that would counter the negative narrative that he hears in the news every day, and that would depict the many and diverse ways we experience this powerful, universal bond. Love is around us all the time, he believes, if we just pay attention.

Jumpstart pays attention. We pay attention to each and every child, and to those magical moments that unfold between adults and children because of our intentionality and values-driven practice. Moments like the one I observed last week in a classroom in Los Angeles. It was the beginning of Jumpstart session, and as soon as one little girl sat down, she declared, “Jumpstart, I’m sad today.” Without missing a beat, the Jumpstart volunteer zoomed her attention on this young girl, met her eye-to-eye, asked her why she was sad (which had to do with her mother not picking her up from school) and proceeded to have a conversation about what might be going on. Within moments, she was fully engaged in the activity, and later I witnessed her enthusiastically participating and skipping between activity centers. It was a small moment between the girl and her Jumpstart friend, but perhaps she experienced it as a moment of love.

I wonder what it could it look like if the foundation of all our actions and interactions, across Jumpstart and externally, was the “strong, demanding love” that Martin Luther King, Jr. talks about, and how that might influence our collective work for educational equity.

Looking back on MLK Day, I see that there was a kind of arc to my learning, and a pretty powerfully consistent message. I am challenged to live into that message, and I want to keep trying. I wonder what it could it look like if the foundation of all our actions and interactions, across Jumpstart and externally, was the “strong, demanding love” that Martin Luther King, Jr. talks about, and how that might influence our collective work for educational equity. It’s great food for thought as we navigate this world and keep our eyes fixed on the vision of every child entering kindergarten prepared to succeed.