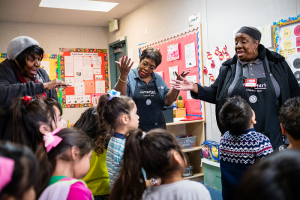 Boyle Heights is a working-class Latino neighborhood east of Downtown Los Angeles, home to a large community of Mexican and Central American immigrants. Steeped in a deep history of community organizing, the neighborhood boasts several grassroots organizations that provide critical services to local residents. Among these organizations is Proyecto Pastoral, a member of the local Catholic parish that provides early childhood education among many other services, including emergency housing, youth programs, and leadership development.

“The one-to-one support they provide is important because it helps children who are new to the center adjust to a classroom setting. The grandparents teach them how to be patient, be considerate, be kind, and make good choices.”

“Most of the kids enter the program speaking Spanish as their first language,” said Ray Ramirez, Proyecto Pastoral’s Director of Early Childhood Education Centers. “One of the issues that is so pervasive, at public schools in Boyle Heights in particular, is that children enter kindergarten and are labeled English language learners, or ELLs. Six years later, in the fifth grade, 78% of them are still in the ELL program and are unable to leave because they are not learning English at a proficient level.”

Being labeled as an English language learner locks children into a deficit-oriented curriculum that exacerbates the academic achievement gap between children from under-resourced immigrant communities and their more affluent peers. Proyecto Pastoral and Jumpstart work together to not only prevent children from entering the ELL program, they also help build up the confidence and social-emotional skills they need to be successful. 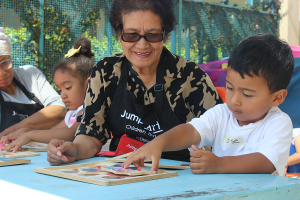 fits our standards perfectly in the social-emotional domain. The one-to-one support they provide is important because it helps children who are new to the center adjust to a classroom setting. The grandparents teach them how to be patient, be considerate, be kind, and make good choices.”

When asked to describe her impact on children, Virginia Mangasi, a Jumpstart Corps member who serves at La Guarderia preschool, described the positive trajectory of one of her partner children, a boy who spoke only Spanish and struggled to befriend classmates: “I was able to connect with him and address his interests and feelings in our everyday encounters. Now he can recognize different colors and shapes, say the letters of the alphabet, and write his own name. He has greatly improved his skills, habits, and behavior in class.”

Foster Grandparents often return to Jumpstart service over multiple years, providing continuity and consistency in children’s education. Preschool teachers can also rely on having additional adults in the classroom to identify the academic and social-emotional needs of their students.

“The Jumpstart Foster Grandparents don’t leave after one year, which is a consistency you don’t get from regular volunteers,” Ramirez said. “That consistency adds to the social-emotional domain of our kids and the opportunity to get language and literacy instruction from people who are trained to deliver that.”

For La Guarderia preschool teacher Graciela Valle, the presence of Jumpstart Corps members is a valuable tool for her work in the classroom. “During the time I have been working for La Guarderia, we have always received high-quality services from Jumpstart Corps members,” she said. “The grandparents and I have built a strong relationship and we have great communication. The children love the grandparents and appreciate them very much. I hope to work with them for many more years.”