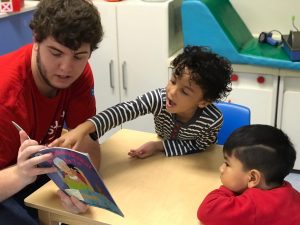 Three-year-old Daniel was in his first year of preschool in Windham, CT. At the beginning of the year, staff noticed that he was struggling with oral language and tended to keep to himself in class. An initial assessment was done by the school’s speech-language pathologist, who found that Daniel would likely need pull-out services for several years to support his language and speech development and get him up to speed with his classmates. So Daniel began his weekly meetings with her.

At the same time that the speech-language pathologist was working carefully with Daniel outside of his classroom, something special began to happen inside the classroom, too. On Tuesdays and Thursdays at 2:00pm, Daniel and the rest of his class waited eagerly for their red-shirted Jumpstart friends to appear at the door. Daniel’s classroom was served by Jumpstart Corps members Makayla, Lauryn, Samantha, Mariah, and Mayra, all students at nearby Eastern Connecticut State University.

Daniel’s time in Jumpstart had played an instrumental role in his growth and development. 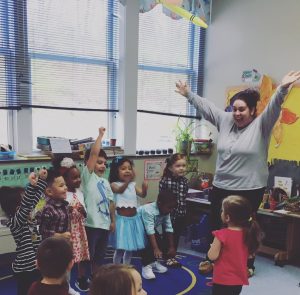 Over the course of the year, Daniel and his classmates would get together with their Jumpstart friends twice a week to read, play, and laugh together. They read fun, vocabulary-rich books about babies who missed their brothers and crocodiles who liked to collect puddles. They sang rhyming songs together and played alphabet games. They learned how shadows are made and how water is absorbed. Each week, the Jumpstart Corps members provided Daniel with the focused attention he needed to feel confident and excited to participate in class. Slowly but surely, he began to come out of his shell. By the end of the year, Daniel was even hopping around and singing Jumpstart songs on his way down the hallway to his speech services.

One day near the end of the year, Michalene, the preschool director, pulled Makayla, the Jumpstart team leader, aside and shared some unexpected, wonderful news: Daniel no longer needed pull-out speech services! Michalene was convinced that it was Jumpstart’s support in combination with the speech-language pathologist’s work that had helped Daniel progress beyond needing intervention services. The school staff agreed – Daniel’s time in Jumpstart had played an instrumental role in his growth and development.

Makayla and the rest of her Jumpstart team were thrilled. It was clear: their persistence and care had made a difference – for Daniel, and for all the children in the class.