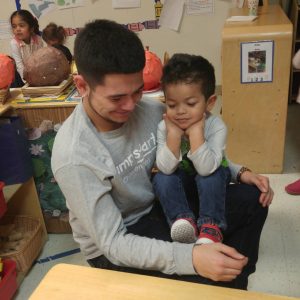 For the last decade, Jumpstart volunteers from the nearby Catholic University of America (CUA) have been supporting language, literacy, and social-emotional development for young children at Barbara Chambers, the majority of whom — nearly 90% — come from Spanish-speaking homes. When Jumpstart began serving at Barbara Chambers, volunteers supported children in just one classroom. Now four out of the center’s five preschool classrooms all receive Jumpstart services. “Jumpstart has come for many, many years, and it really helps,” says Sonia DiMajo, the center’s director. “We can really see the difference between the children who receive Jumpstart compared to those who don’t have the opportunity, especially in their language skills.” Jumpstart’s site manager at CUA, Allison Wood, agrees. “At the beginning of the year, the volunteers walk into the classroom and the children don’t really speak any English at all; they’re very quiet. It’s amazing to see their growth in English by the end of the year.” 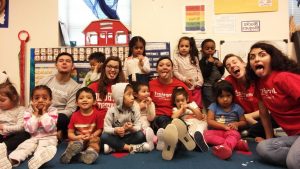 Barbara Chambers and Jumpstart at CUA are a well-made match for one another. At the center, each classroom must always have one fluent English-speaking teacher and one fluent Spanish-speaking teacher. “The whole school day is done in both languages,” says DiMajo, “All day walking around the school you can hear both languages being spoken.” DiMajo herself was a teacher in El Salvador before she immigrated to the United States — she taught for 10 years at the center before becoming its director in 2001. CUA attracts a large number of students from Spanish-speaking countries, which enables Jumpstart to have at least one or two native Spanish speakers on each team of volunteers at Barbara Chambers, and Wood notes that the college students “really enjoy being connected to the local Hispanic community.”

One of those CUA college student volunteers is Maria Montes, now a Team Leader in her second year serving with Jumpstart. Montes is studying early childhood education with ambitions of becoming a teacher and possibly opening a preschool in her native Nicaragua. “I love that there is cultural diversity in the classrooms and that the school is such a community,” Montes explains. “And the families at Barbara Chambers are so supportive of their children’s education.”

It’s clear that Barbara Chambers is a special place in the local community, and Jumpstart is thrilled to have been a part of that work for the last 10 years. “The teachers are so happy with Jumpstart. It’s one of the best programs for language. It’s a benefit to the families, the children, the teachers — they all get the benefit. We hope we can have it for a long time.”