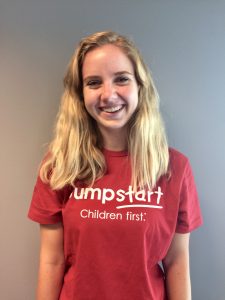 Thousands of college student and community member volunteers, known as Corps members, serve with Jumpstart every year. Each team of Corps members has one team leader — often a Corps member who is returning to serve again after at least one full year with Jumpstart. Team leaders receive additional training and take on additional responsibilities — they manage the biweekly team meetings with their peers and lead a number of activities in the classroom. Serving as a team leader brings an added element of leadership to one’s Jumpstart service, both in and out of the classroom. Today we are highlighting one of those dedicated team leaders, Ciara Clark, who is serving at Whittier College in California.

Last year, Whittier College student Ciara Clark pulled off the lone hole-in-one at the Matador Invitational, helping her team finish in the top 10, and earned the All-SCIAC Sportsmanship Award by garnering unanimous votes from peers in her conference. Now in her senior year, Ciara is currently team captain of the women’s golf team. She also begins her second year as a Jumpstart Corps member, this time as a team leader to help others develop the same confidence and grit that enable her to succeed as a scholar athlete.

“I had an amazing team leader last year,” Ciara said. “She was organized and passionate about working with kids. When a position opened up this year, I knew I could help change the lives of not only children, but also members of my team.”

As a Global and Cultural Studies major, Ciara didn’t expect to spend her undergraduate years teaching or working with children. A series of tutoring jobs, however, led her to discover the impact she could have in the classroom.

“My overall objective is to leave the classroom in a better place than when we first enter it… It’s important to build up the confidence of everyone around, both Corps members and children.”

“I went to a local elementary school and tutored someone in the second grade,” Ciara said. “She opened my eyes to how much I could change young people’s lives. With Jumpstart, I realized I could change the lives of children at an even earlier age.”

Corps members from previous years inspired Ciara to join Jumpstart by sharing silly stories from the classroom, anecdotes about children’s progress during the school year, and their motivations to fight for education and equity in the local community. As a Jumpstart team leader, Ciara is excited to bring the same drive and motivation to a new cohort of students.

“My overall objective is to leave the classroom in a better place than when we first enter it,” Ciara said. “I want to help the kids become positive and be able to proudly say, ‘Today, I learned about wind and water’ or ‘Today, I learned about farm animals.’ It’s important to build up the confidence of everyone around, both Corps members and children.”

Jumpstart service has also inspired Ciara to set a trajectory toward teaching and service after graduation. She has been accepted into Teach For America to become an elementary school teacher in her home state of Nevada, and is preparing applications for the Peace Corps and Fulbright programs.

While time management can be a challenge, Ciara shows no sign of slowing down her studies, athletics, and Jumpstart service. She is planning team-bonding activities for the near future, and looking ahead to a smooth transition from Corps member trainings to Jumpstart sessions.

“My team members are all positive, dedicated and hard-working girls, and I’m excited to work with them,” Ciara said. “Our partner children will be a lucky group of kids. My team is already prepared and passionate.”