Atlanta Kicks Off Another Great Read for the Record 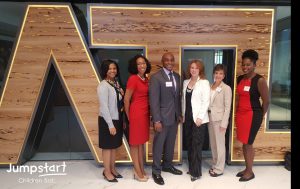 Jumpstart’s Atlanta Advisory Board Chair and National Board Member, Yendelela Neely Holston, started the night off by introducing the crowd to Jumpstart and Read for the Record. She was followed by guest of honor James Cole, Jr., former US Deputy Secretary of Education under President Obama and new member of Jumpstart’s National Board. Cole shared his reasons for joining the Board and what excites him about Jumpstart’s work, including, most importantly, Jumpstart’s evidence-based approach.

“We don’t want to just do things that sound nice or feel good; we have the evidence that shows Jumpstart really does work.”

Naila Bolus, Jumpstart’s President & CEO, closed out the night by sharing this year’s campaign book, Quackers by Liz Wong, with the audience and highlighting how they could get involved with Read for the Record.

Jumpstart thanks Kilpatrick Townsend & Stockton LLP and the Metro Atlanta Chamber of Commerce for sponsoring this year’s kick-off. In addition, Jumpstart is grateful to its Atlanta Advisory Board and Young Professionals Board whose tireless efforts made the event possible.