BOSTON (August 1, 2017) — Few things make as strong an impact on congressional leaders as the collective voices of hundreds of people coming together to tell their story. Last month, Jumpstart alumni from across the country came together to do just that. In response to the current administration’s proposal to eliminate the Corporation for National and Community Service, which administers the AmeriCorps and Senior Corps programs, and slash Federal Work Study funding in half, alums moved to action! Nearly 550 alumni sent a letter to congressional leaders urging them to fully fund these critical federal programs. Using their firsthand experience as AmeriCorps members and recipients of Federal Work Study, Jumpstart alumni explained how these programs provide life changing experiences for college students, young children, and communities.

In 2015 alone, 62.6 million Americans volunteered approximately 7.8 billion hours of their time, worth an estimated $184 billion to the economy. 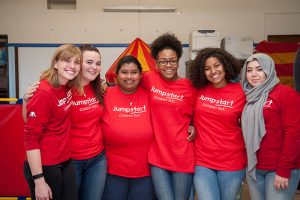 AmeriCorps and Senior Corps members contribute directly to the education, public safety, and health of their communities. This opportunity to serve prepares young people for the workforce, builds stronger neighborhoods and communities, and develops in volunteers the values of civic duty and compassion toward others. National service is also a cost-effective approach to community development. In 2015 alone, 62.6 million Americans volunteered approximately 7.8 billion hours of their time, worth an estimated $184 billion to the economy. Federal investment in the Corporation for National and Community Service allows Jumpstart Corps members and the preschool children whom they serve to continue to learn, thrive, and grow.

Federal Work Study supports Jumpstart in recruiting and training its Corps members. This funding allows all college students to participate in important workforce training and service opportunities, including with Jumpstart and countless other community service and literacy organizations. It also enables Jumpstart’s volunteers to better reflect the students they serve—roughly half of all Corps Members are first-generation college students. Cutting this funding would not only make college less affordable for low-income students, it would remove valuable workforce training opportunities for college students and eliminate critical early education opportunities for preschool children served by Jumpstart Corps members.

In their letter to key congressional leaders, nearly 550 Jumpstart alumni stood up for the federal programs that allowed them to serve. Please read the full text of their letter here.