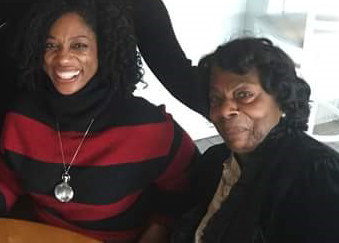 Sheila and Olga Jones both serve with Jumpstart’s Community Corps in Boston. Community Corps is Jumpstart’s intergenerational service program, where older adults serve in preschools in their communities. Sheila, 53, and Olga, 83, also happen to be mother and daughter. Sheila serves as team leader on a team with her mom (and is also a team leader on a second team, doing double Jumpstart service!). In honor of Mother’s Day, we sat down with Sheila and Olga to talk about their experience serving with Jumpstart together.

How did you both find out about Jumpstart Community Corps?

Olga: I had come to the end of my career — I was a registered nurse. I worked at Children’s Hospital for 20 years and then I went to University Hospital, which is now Boston Medical Center; I worked there for 25 years. So I was retiring, and I knew I couldn’t just sit at home and do nothing! I kept looking for things that would keep me stimulated, keep me out there, and when I saw Jumpstart’s ad, I checked it out. I liked what I heard and saw, so I joined. That was in 2006 or 2007.

Sheila: I had been in a serious accident, and had attempted to go back to work, but I realized that I couldn’t really work as I had intended. So my mother said, “Let me ask if they also take anyone younger.” I guess I was the exception, because I wasn’t quite 50 yet, but they said I could join too, so I went ahead and joined with her. I started about two or three weeks later than she did.

What did you like about Jumpstart when you first started?

Olga: It was like having a new grandchild! The comradery and watching the child bloom and blossom. I just felt these children were so respectful of everything we had to offer them. In fact, I still have a picture of the little fella that I had —

Olga: It was just such a great feeling. I had one grandchild at the time at home, and enjoyed working with him, and then to go and have another child that I could reach out to… it was a great feeling of accomplishment.

Sheila, what is it like to volunteer with your mom? 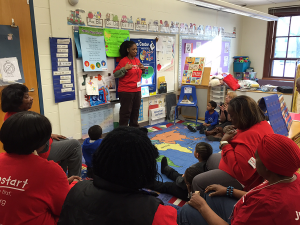 Sheila: It gives me a nice combination for my week, because half the week I’m with her and half the week I’m with my other team. I can be a little more comical and relaxed with her. She keeps me on my toes — whether it’s time management, or if she thinks that the way we’re presenting something isn’t going to work for the children, or if I’m making an activity too challenging because I’m overthinking it. She always keeps me on my toes and challenges me.

Olga, what about you, what is it like volunteering with your daughter?

Olga: It’s great! There is a comfort level of course, especially because I go back and forth to the sessions with her taking me in the car. At the center, I sometimes point out things to her that I think should go a different way. But I also let her know when I thought things went really smoothly and on target. It’s just a very nice, comfortable feeling.

Do you have a favorite part about volunteering on a team together?

Sheila: There was one time that was really comical this year. Usually when we introduce ourselves to the classroom on the first day, we say our full names, but we must have just said our first names this year, “This is Ms. Sheila, this is Ms. Olga,” and so on. So one day in class, my mother was doing something and I yelled across the room “Mom. Mom!” And these little kids all stopped and asked, “Why are you calling her mom??” They all got shocked! Number one, that I could have a mother, and number two, that I was her daughter. They said, “No, you guys are make believe mother and daughter.” And I said, “No, no, we’re mother and daughter.” Even the teacher was surprised!

Olga: I think the children’s concept of mother and daughter was a grown woman and a little child. They just couldn’t understand that the two of us are grown and are mother and daughter. One of my little partner children kept saying, “Are you a for-real mother, a grandmother, or a make-believe?” I said, “I’m a real mother. And I’m also a real grandmother!”

How do you see your relationship with the Jumpstart children? 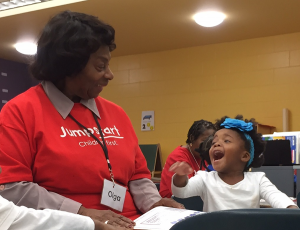 Olga: The relationship is great. Even having my first grandchild, I learned so much more from these children. When you raise your own children, you’re so busy with everything in life, from housekeeping to working. Now [as a grandparent and volunteer], you have so much more time on your hands that you can give to these children. I have seen the results, both with my own grandchild and also with the children at Jumpstart, because you you’re devoting more of your time and more of your whole self to them. We always end up with a great feeling of bonding with the Jumpstart children, and when we leave at the end of the term it’s such sweet sadness. In fact when, I go into the center, they rush at you, because they’re so excited! I had to tell the children, “Now wait a minute, slow down before you knock me over, because I’m not a young thing anymore!” Their enthusiasm, it rubs off on you, and makes you feel so good. They really make my day. 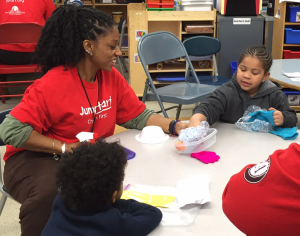 Sheila: Especially this year, it really felt good. And you’re not only making a connection with the children to help them to learn their letters and words that rhyme and phonemic sounds. This year I had four parents — and usually I don’t get this many parents — four parents that came up to introduce themselves and let me know that they were really proud of the fact that their children were writing their names, and that they were working with them after school to make sure they were practicing.

Olga, did Sheila like to read when she was growing up?

Olga: Yes! In fact, Sheila is my middle child — I had twins that were born after her — and one of Sheila’s designated chores was that each night before the twins went to bed, she had to read their bedtime story to them.

Sheila: And it passes on in generations too! One of my twin sisters’ sons, when he was born, she was in the military reserves. She was still active the first three or four years of his life and would have to go away regularly, so I was the reader for him. One night when I was out celebrating my birthday, I came home around 12 or 1 in the morning, and I came home to him waiting for me to read to him!

Olga: He woke up and went to your bedroom! Yes, bedtime reading was always a must in our house.

What were your favorite books to read together?

Olga: We had all the Dr. Seuss books. We had one book that I actually hid from my grandson…. It was a Berenstain Bears book. I had to read it so many times that I got tired of reading it and I hid it under the sofa covers! And my grandson actually found it and made me read it to him again. (laughs) His love of reading – because we read to him so much — I could see the results. He sailed through school: graduated cum laude from Milton Academy, got a full ride to Harvard. Everything was just so easy for him, and I know a lot of it has to do with the amount of time we spent reading to him. Unfortunately, I didn’t have that much time to read to my own children, but, reading to my grandson, he just grew up with a love of books.

Sheila: Even though my mom says she didn’t have time to read to us the way she wanted to, her thing was she would take us to the library. She’d make us get our little pile of books for the week, and then we would have to read them and make sure we could report what the story was about. I started off with simple books, like See Dick and Jane Run, and Mickey Mouse, and Henny the Penny books, and later I got caught up in the Nancy Drew series, and Pippi Longstockings.

What are your favorite books to read with your Jumpstart children? 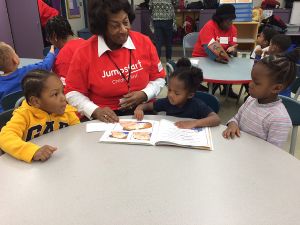 Olga: Oh gosh, there’s so many of them! Because the children just get so into the books with you.

Sheila: My two favorites are The Ugly Vegetables [by Grace Lin] and Hooray a Piñata [by Elisa Kleven].

Olga: And I love Oonga Boonga [by Frieda Wishinsky] because the children are so fascinated with the name because it’s unusual. And Peter’s Chair [by Ezra Jack Keats] also, because a lot of the children have younger siblings. Those are probably my two favorites.

Do you two have any special Mother’s Day traditions?

Olga: Oh, I get wined and dined, I get manicured and pedicured… (Laughs)

Sheila: And if I’m not cooking, I might get to share in the pedicure and the manicure! We always make sure she gets a nice meal, we always go out, and we always attend church service, we celebrate at church as well.

Sheila: It’s a good feeling. I’m not a mother, but I’m an aunt, a godmother –

Sheila: — and to be able to witness children as they catch on and start to love education, love achieving, know their letters, know how things work — even basic stuff like colors and shapes — it’s a special feeling. And I’m still always learning too! To this day, I always get surprised that Jumpstart is still teaching us something new. We find there’s always something new to present to the children.

Olga: For me, as far as the experience working with children, it’s one of my first loves. I was a pediatric nurse for years, and to find something I can do on a volunteer basis in that same line, it just — it just fulfills my life.