The Legacy of Madame C.J. Walker: A Playful Classroom Activity for Black History

Jumpstart Northeastern Corps member Nina is always changing her hair. Each week, the children at the Hattie B. Cooper Community Center in Roxbury, Massachusetts, wait eagerly to see what color and style she’ll walk through the door with. So far, she’s had all colors of cornrows (pink, black, and orange!), black curly hair, straight red hair, and a pink and gray hairdo with black roots. These days, Nina is modeling a mix of honey blonde, brown, and auburn curls. Each time Nina sports a new look, the children ooh and ahh with excitement.

Unfortunately, hair like Nina’s has not always been met with such an enthusiastic reception. African American hair has long been the subject of controversy and prejudice, with dress codes at workplaces and schools often singling out natural black hair styles as inappropriate or distracting. In honor of Black History Month, one teacher at Cooper wanted to create an activity that would generate the same excitement and positivity that Nina’s creative hairstyles inspired in her students and that would encourage positive self-image while also highlighting an important figure in Black History: Madam C.J. Walker.

One day last week, Ms. Nicole asked the Jumpstart team to help her transform the class’s dramatic play area into a diverse hair salon in the spirit of Madam C.J. Walker. “In all honesty, I was completely unaware of her!” says team leader Isabelle, when Ms. Nicole first suggested the idea. Born Sarah Breedlove in 1867, Madam C.J. Walker was the daughter of sharecroppers in Louisiana. Orphaned early and widowed young, she went on to develop a revolutionary system that transformed black hair care and became the first self-made, black female millionaire in America. With this wealth, Walker became a prominent philanthropist, particularly focused on improving outcomes for women: funding scholarships for women at the Tuskegee Institute and donating generously to a variety of black charities. 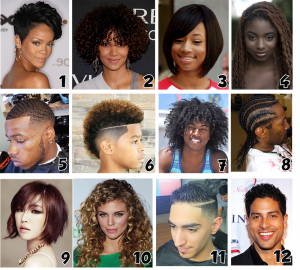 Isabelle, Nina, and their team loved the idea of introducing the children to such an influential black woman, as well as using the environment of a hair salon to teach the children about diversity and difference. Isabelle and her teammate Cayley bought a hairdresser playset, and got to work making a “Hairstyle Board” (see left) full of pictures of various hairstyles that reflected the diversity of the children in their classroom. “I wanted the students to look up at the board and see a hairstyle that they liked and wanted for themselves.” Isabelle also hoped that the newly transformed dramatic play area would be an exciting gateway for the children: a place that fostered their excitement to learn not just about hair, but all about the different cultures represented on the board. “Differences are everywhere and I’d like for them to know that it’s more than okay to be different from your neighbor or the woman at the grocery store.”

By choosing an accessible topic that children are already excited about, Ms. Nicole and the Jumpstart Corps members have seamlessly integrated Black History Month into their classroom while also encouraging play, curiosity, and creativity. Isabelle is thrilled with the result of their hard work to create this space. “I want the children to feel empowered and learn about a figure they can look up to and admire. I know how important positive role models can be for someone growing up and hope they’ll find someone that really resonates with them.”