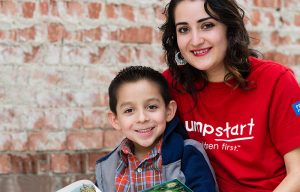 Jenny Villegas was a Jumpstart Corps member at the University of Southern California in Los Angeles. Thirty miles away, in Santa Ana, her brother, Daniel, was a Jumpstart student. Jenny and Daniel’s parents came to the United States in search of a better life for their children. “My parents are both working class, low-income immigrants from Mexico,” Jenny explains. While money has always been tight and her parents didn’t have a lot of time to spend reading to their children or helping them with homework, Jenny was determined to become a first-generation college student. “I have always understood education as a way out of poverty – a way for my family to become successful.”

Because I had shared with her the work I was doing with my own partner children, my mom knew exactly what Jumpstart was and how lucky Daniel was to be a part of it.

When Jenny’s mom found out that Jumpstart was going to be at Daniel’s school, she called Jenny 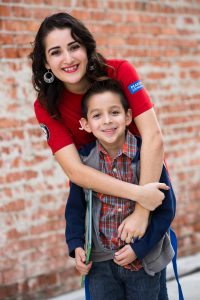 immediately, full of excitement. “Because I had shared with her the work I was doing with my own partner children, my mom knew exactly what Jumpstart was and how lucky Daniel was to be a part of it. During his time in Jumpstart, we both saw improvement in Daniel’s oral language, alphabet knowledge, and writing skills. He loves going to school, reading, and spending time with his friends.” After school, Jenny aspires to be a teacher. “Jumpstart was the perfect way for me to get real classroom experience and work in a community that I could identify with. South Los Angeles reminds me a lot of my home in Santa Ana. They have similar challenges, but they also have resilience, great food, rich culture, and space for transformative change. I think it’s awesome that Daniel and I could both be part of the Jumpstart program, experiencing two sides of the same coin!”