BOSTON, MA – October 24, 2016 – Jumpstart is honored to announce Martellus Bennett as an official literacy champion for the 11th anniversary of Jumpstart’s Read for the Record, a national campaign that helps address the educational inequities that leave too many children unprepared for kindergarten, by engaging millions of children and adults in the world’s largest shared reading experience. 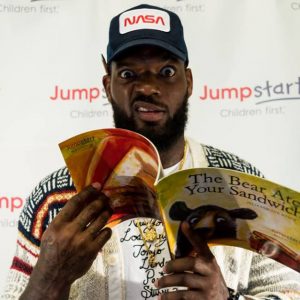 New England Patriots’ tight end and Creative Director of Awesomeness for The Imagination Agency, Martellus Bennett, joins a host of prominent celebrities, athletes, and leaders who have partnered with Jumpstart to serve as literacy champions for its 24-hour celebration, which has successfully mobilized over 17 million children and adults since its inception. Read for the Record not only inspires adults to read with children, but also spurs policy makers, influencers, and organizations to take action toward transformative change in early education while putting books in the hands of more children across the country. On October 27, 2016, children and adults will read this year’s official campaign book, The Bear Ate Your Sandwich by Julia Sarcone-Roach (Alfred A. Knopf Books for Young Readers).

“Martellus is passionate about giving all children opportunities to think creatively, have fun, and follow their dreams, a passion that is not only reflected in his work leading The Imagination Agency, but also in his own life as an athlete, children’s book author, and lifelong dreamer,” said Naila Bolus, President and CEO of Jumpstart. “We are so honored that Martellus has joined us to celebrate Jumpstart’s Read for the Record and to give even more children access to books that will inspire them for many years to come,” she continued.

“As a father, one of my favorite things to do is to sit down to read with my daughter Jett. Through reading, we explore unknown places and stretch the limits of our imagination with a good book. From chasing monsters to fishing for mermaids, scuba diving for chocolate sharks, and flying on invisible birds, books are the inspiration for our creative explorations,” said Martellus Bennett. “I’m excited to join Jumpstart’s Read for the Record and to be a part of their efforts to help all children become lifelong learners and to discover their passions through reading,” Bennett continued.

Literacy champions will help Jumpstart’s Read for the Record engage the widest possible audience and increase the visibility and awareness around the early education crisis in America by supporting the campaign via social media, recording PSAs, and reading with children on October 27th as part of the day’s Read for the Record events and activities.

Jumpstart is a national early education organization working toward the day every child in America enters kindergarten prepared to succeed. By participating in Jumpstart’s year-long program, children develop the language, literacy, and social-emotional skills they need to be ready for school, setting them on a path for lifelong success. Since 1993, Jumpstart has trained 45,000 college students and community volunteers to transform the lives of 95,000 preschool children nationwide. Learn more at jstart.org and follow us on Twitter at @Jumpstartkids. 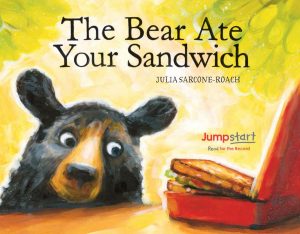 ABOUT THE BEAR ATE YOUR SANDWICH

Julia Sarcone-Roach’s The Bear Ate Your Sandwich is the tale of a bear, lost in the city, who happens upon an unattended sandwich in the park. The bear’s journey from forest to city and back home again is full of happy accidents, funny encounters, and sensory delights. The story is so engrossing, that you will not see the surprise ending coming!