“We had the opportunity to make a difference,” Gil Zamora eagerly replied when asked why he joined Jumpstart 15 years ago at San Francisco State University (SFSU). “I learned so much about the different communities and people of San Francisco while serving in preschool classrooms throughout the city. In college, you get so caught up in your own little bubble. Jumpstart made sure that didn’t happen to me.”

Gil was raised in Lynwood, California, a city in the Compton area of Los Angeles. In the 1990s, it was an area impacted by gang violence, social protests, and community uprisings. “I was in 4th grade the night the Rodney King riots started,” Gil said. “I was one of about three students that showed up to school the next day because education was that important to my mom. But when the Compton Fashion Center across the street from my elementary school went up in flames, we were all scared, and my mom came to get me right away.”

Gil is proud to be a first-generation Mexican-American and the first in his family to go to college. Once at SFSU, Gil was motivated to give back to the community. Because of his upbringing, Gil was able to identify with many of the Jumpstart children and families. He fell in love with the Jumpstart program. Jumpstart sparked Gil’s lifelong interest in and advocacy for early childhood education.

Because of his upbringing, Gil was able to identify with many of the Jumpstart children and families… Jumpstart sparked Gil’s lifelong interest in and advocacy for early childhood education.

Upon graduating from SFSU, Gil moved to Oakland, California where he worked as a program coordinator 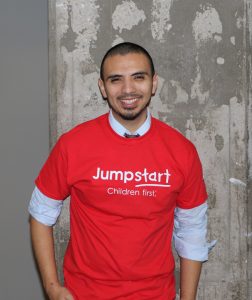 for a family literacy program serving high-risk communities. He went on to earn his Masters of Fine Arts in Creative Writing, is currently a development manager for HealthConnect One in Chicago, Illinois, and serves on Jumpstart Chicago’s Young Professionals Board.

“Jumpstart shaped my values, influenced my career, and deepened my appreciation of and respect for different cultures. Jumpstart shaped what I value as a person and as a professional.