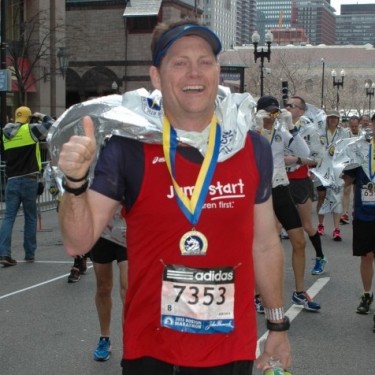 Jeff has played a critical role over the past 6 years generating excitement among the various runners that have joined Team Jumpstart for the Boston Marathon. Jeff stops at no obstacle when it comes to fundraising and helping support Jumpstart’s vision as we work toward the day every child enters kindergarten prepared to succeed. Recently, we caught up with Jeff to learn more about his final training and fundraising days.

You live in Kansas, why Jumpstart and why Boston?

I first heard of Jumpstart when I was working at MFS Investment Management, a Boston based company, where I was a regional director in Kansas City. I ran my first marathon in 2007 and struggled to break the four-hour mark. I had heard that Boston was the Granddaddy of all marathons, but a qualifying time was needed to enter the race and I knew I was way too slow. On the MFS website I saw a post: “Interested in running Boston? Click here.” So I did – and I was taken to a website that talked about applying to run for a charity called Jumpstart. I researched Jumpstart’s website to learn about the charity making certain that it was a cause that I could get behind. As an out-of-state runner, I wanted to stick out, so I guaranteed Jumpstart that if selected I would double the fundraising minimum each runner was responsible for. I was selected to be on a team of 15 charity runners… and the rest is history!

Your motto is, “Train hard, but fundraise harder.” How do you do it all?

I have to be honest, I really thought the 2011 Boston Marathon was going to be a “one and done” experience. I figured I would train hard because I really wanted to break the four-hour mark and having a PR (personal record) in Boston would be such an achievement. As I began to train, I decided to up my efforts in fundraising too and I raised the bar as far as what I wanted to raise. I certainly wanted to hit my personal goal of $6,500 for Jumpstart but more than that I wanted to be the TOP fundraiser on the team. Fortunately for Jumpstart there were some other very committed individuals I was competing with. When all was said and done, I raised over $20,000 that year and I did in fact become the top fundraiser. As I was fundraising hard, I re-committed to training too. I ended up running a 3 hour and 41 minute marathon, beating my previous PR by over 26 minutes. I was elated! So elated, that I came to the realization that if I were to really focus on training and lose a few more pounds, maybe, just maybe, a Boston qualifying time was in the cards for me. Five months later on September 11th of 2011 I ran a 3 hour and 22 minute marathon and had my first Boston qualifier time!

You had originally intended to run Boston just once, what changed your mind?

In 2012, Jumpstart called to ask if I wanted to run Boston again on behalf of Jumpstart. I was excited to share with them that I was now a qualified runner and therefore I didn’t need a bib to enter the race, but I still wanted to fundraise for Jumpstart. Jumpstart gave me the opportunity to not only raise money for a cause that I was passionate about, but run the oldest annually run marathon in the world, which to this day ended up being one of the top five days in my life. I felt compelled to continue to fundraise for Jumpstart each year as a way of saying thank you. Running Boston in 2013, the year of the tragic bombings, was another reason I wanted to continue to give back. I did give my friends, family and co-workers a break from my fundraising efforts in 2015, but with 2016 being my last hurrah I am at it once again! Although I ran a qualifying time in 2015 by 2 minutes, I needed to run 38 seconds faster to earn my way in. This time, I called Jumpstart to see if they had any bibs to give out. With only three bibs for 2016, they were vetting runners to raise as much as possible, and fortunately, I had a track record they could trust. I am back in!

Your journey with Jumpstart has been a powerful one, how do you feel heading into your final race?

I could not be more excited to run the Boston Marathon this year and will wear my Jumpstart bib with great pride. I will also be video documenting my run with my Go Pro – interviewing fellow runners, spectators, and volunteers along the way. I will create a YouTube video so my donors can see what running the greatest marathon in the world is all about! I will enjoy this year’s race to the fullest and while it may take an extra 2 hours, I’m going to take in every minute of it!

While we know Jeff’s Boston Marathon days might be coming to an end, he will always be part of the Jumpstart family. To support Jeff on his final run, click here.