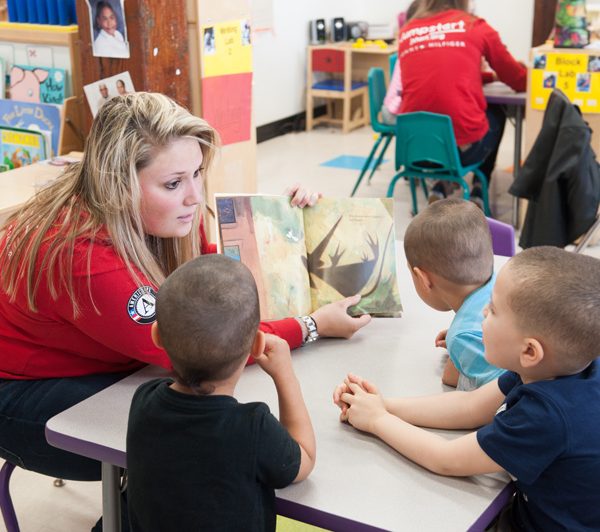 On Thursday, December 3rd, 2015, Jumpstart officially launched a new site in Worcester, MA with the support of Worcester State University, the United Way of Central Massachusetts, the Massachusetts Service Alliance (MSA), and the Amelia Peabody Foundation. The launch of this new program was featured in the Worcester Telegram:

WORCESTER, MA, December 4, 2015 – Early childhood literacy was the center of discussions Thursday at Worcester State University when the school announced its partnership with Boston-based organization Jumpstart.

A partner company of AmeriCorps, Jumpstart is a yearlong program in which corps members, mostly college students working on a volunteer basis, spend four hours a week reading with at-risk children to improve the children’s language and literacy skills.

In Worcester, 62 percent of third-graders failed to receive a score of proficient or higher on the 2014 MCAS tests, the organization said.

Emphasis on a smaller ratio of AmeriCorps members to children in the classroom is at the heart of Jumpstart’s mission, said Mark Reilly, Jumpstart regional vice president. He said the program’s ratio never goes higher than one corp member to three children.

“You can completely change the dynamics in a classroom by providing more directed attention,” he said.

One example of the importance of having a low ratio is an improved vocabulary.

“When you’re working on a more individualized basis, you can have deeper and more language-rich exchanges,” said Mr. Reilly.

“Children who have the opportunity to participate in higher quality early education are more likely to succeed in kindergarten…. Children who arrive (without additional help) struggle to retain material,” he added.

After one year, Julie Fitzpatrick, Jumpstart’s city program and site manager for Worcester, has recruited 33 AmeriCorps members from the Worcester State University student body. They are working at the preschools at Elm Park Center, Webster Square Day Care and two branches of the Guild of St. Agnes.

Read the full article on the Worcester Telegram website.