Turn Your Potential Into Greatness

Atalaya Sergi, MSW, is a Deputy Director for Jumpstart overseeing community engagement, partnership development, and Jumpstart programs in California, Washington, and Texas. Atalaya has been at Jumpstart for eight years and currently lives in Los Angeles, CA.

“Never underestimate the power of dreams and the influence of the human spirit. We are all the same in this notion: the potential for greatness lives within each of us.”- Wilma Rudolph

I have often wondered what in a person turns potential into greatness. What switch is thrown, what spark is lit, or what dam breaks inside that activates their potential, causing them to change their own life, the lives of those around them, and in some cases, change the course of our history and the destiny of a people.

I grew up in a small town in central Virginia called Farmville. It was also home to Barbara Rose Johns, a young, American civil rights leader-pioneer. Barbara Rose Johns attended R. R. Moton High School in the 1950s during the “separate but equal” era. While things were certainly separate, there was nothing equal about the two high schools in Farmville. The students at the all-black R.R. Moton high school were frustrated with the crowded classrooms, the rain that poured in during storms, and the cold that forced them to huddle next to the wood stoves as they tried to keep warm. Unfortunately, wood stoves in a tar paper and plywood structure will do little to warm you from the cold winds of a Virginia winter. Imagine children trying to learn in such an environment! 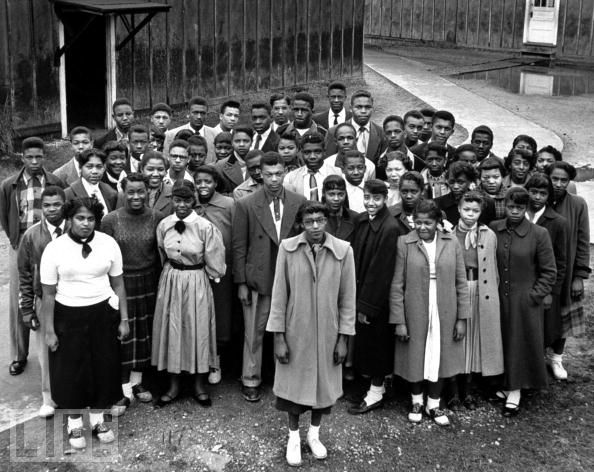 Barbara had had enough and gathered the support of her peers and the student council, taking her concerns to one of her teachers. I can imagine her passionate plea for an adequate facility, something truly equal to the all-white high school, with conditions that would not hinder learning. It is said that her teacher listened and then told Barbara, “So do something about it.” The switch was thrown, the spark lit, the dam broke. On April 23, 1951 Barbara Rose Johns led a student strike for equal education (photo on the right), which ultimately became the largest and only student initiated case, Davis v. The County School Board of Prince Edward County, to be part of the five cases consolidated into Brown v. Board of Education. Barbara contributed to the landmark case that made “separate but equal” unconstitutional in public education.

In the 1980s, I had the opportunity to walk the halls of the former R.R. Moton High School building where I was reminded of what took place within its walls thirty years prior. It was a particularly difficult year for me and my family. As I remembered why the building I went to class every day in existed, it gave me the courage I needed to face each day and stay focused on learning, the least I could do to honor Barbara’s legacy. Barbara Rose Johns spent her life devoted to quality education. She became a librarian and worked in education until she died in 1991. She changed the lives of so many in such a deeply profound way and impacted the destiny of a people.

Our Corps members know that a firm foundation will ensure the academic and life success that breaks the bonds of poverty, changes lives, and makes dreams attainable.

In my work at Jumpstart I am reminded of Barbara Rose Johns daily. I see the same passion for social justice and the same brand of greatness realized in our Corps members. These volunteers join Jumpstart to make a difference for children, to work in partnership with teachers to ensure that preschool children receive the high-quality early education that is their right. Our Corps members know that a firm foundation will ensure the academic and life success that breaks the bonds of poverty, changes lives, and makes dreams attainable. They give a year (or sometimes more) to this cause and do so with excellence, dedication, and an unstoppable drive to make a difference. Their passion even pushes many of them to reach beyond their classroom when there is a need.

I ask you to take a moment right now to consider if you are realizing your greatness or if you are still in “potential mode.” If your honest answer is “potential mode” I challenge you to revisit your dreams, to explore what moves your spirit, and then to do something about it. Let your switch be thrown, your spark be lit, and your dam be broken!