Five Things You Should Know About Our Amazing Jumpstart Alums 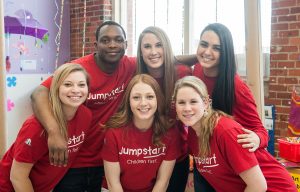 If I could pick one word to describe the Jumpstart alumni experience, it would be transformative. Every Jumpstart alumni story that I hear is unique, giving me insight into how the Jumpstart experience helps to shape our Corps members personal, professional, and/or academic aspirations. Take Alba Callejas, for example. Alba started as a Marine Science major who switched to a Psychology major, and is now getting her Masters in Anthropology and Education, all because of her experience with Jumpstart.

Who are our Jumpstart alumni you might ask? Jumpstart alums are incredibly talented young professionals who have served as Corps members in the Jumpstart program and share a common belief that high-quality early education truly makes a difference in the lives of our youngest learners. Since 1993, over 36,000 alums have served over 76,000 children in Jumpstart classrooms across the country. Today, we have alums living in every state, plus many alums who live abroad.

Here are five things I think you should know about our amazing Jumpstart alums.

1. A large portion of alums first joined Jumpstart through the Federal Work-Study program to do something other than a typical office job or to fulfill a course requirement.

2. The Jumpstart experience helps many alums decide what they want to do after college.

“Before Jumpstart, I had little understanding of the educational disparities. Now, I want to work in non-profit management to enhance both the nutrition and education for children in urban schools.”
– Alba Callejas, Suffolk University Corps member and team leader (2010-2014)

3. Jumpstart alums take with them many different skills from their time in the classroom – long after completing service.

“Jumpstart taught me the power of collaboration and partnerships. There are always key partnerships and common goals that different organizations bring to the table.”
– Gil Zamora, San Francisco State University Corps member and team leader (2000-2002) 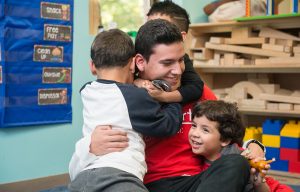 4. Jumpstart alumni love spreading the word about their days as Corps members.

“If Jumpstart needs stories or a spokesperson, I would love to sing it through the rooftops!”
– Judy Neufeld, Tufts University Corps member, team leader, national development intern (2001-2005)

5. …and it’s hard for alums to say goodbye. #childrenfirst

“The most memorable experience from my time at Jumpstart is all of the relationships I created – at all different levels, from teachers to the broader community. Today I still keep in touch with Corps members and teachers from Jumpstart!”
– Mario Mejjia, San Francisco State University Corps member and team leader (2008-2010)

Thank you to all of our alums who join us on our journey as we work toward the day every child in America enters kindergarten prepared to succeed. Without you, we wouldn’t be able to serve over 11,000 children in some of the most under-resourced neighborhoods across the country. Click here to learn more about upcoming events, career opportunities, and benefits that all Jumpstart alums are eligible for.