Boston Globe: Obama’s views on race anchored on US capacity to change

The Boston Globe recently featured President Obama’s visit to a Jumpstart classroom in Washington, DC, to mark the Martin Luther King, Jr. Day of Service Monday. The First Family joined Jumpstart Corps members to assemble books for Jumpstart’s writing center. Each blank book serves as a canvas for children to explore the use of print and the meaning of words by writing and illustrating their own stories. In addition to the books, the First Family created notecards for a matching game used throughout Jumpstart’s school year program in which children pair the correct uppercase and lowercase letters in an effort to build alphabet knowledge. President Obama’s commitment to children’s literacy, education, and service was clearly demonstrated on the MLK Jr. Day of Service and it was an incredible honor to welcome the First Family into the Jumpstart family.

Read an except from the Boston Globe article below. 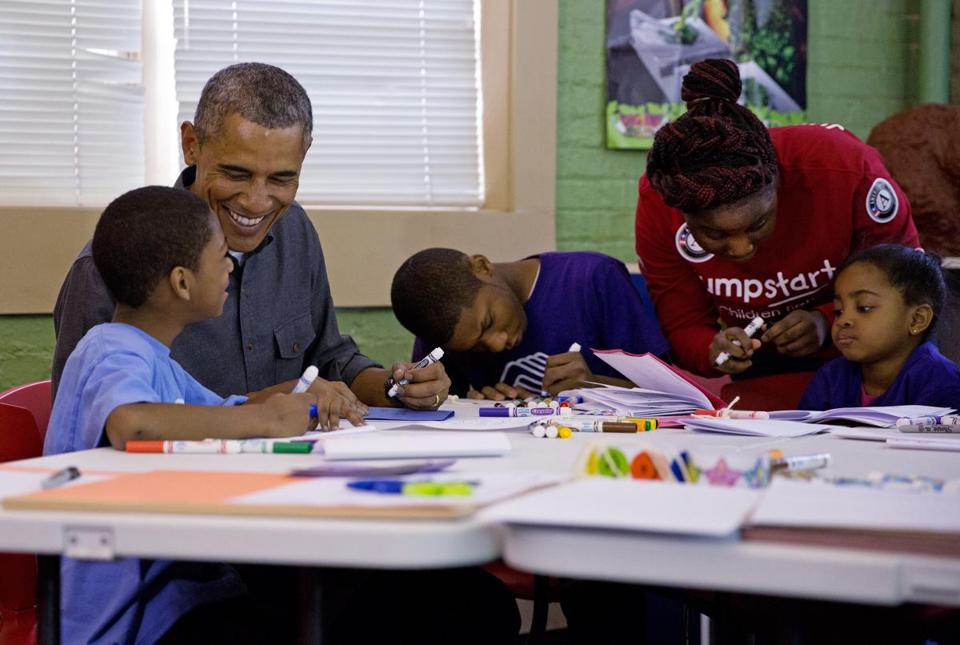 Washington, DC, January 20, 2015 – During racially tense moments that have beset the nation recently, many Americans have longed for President Obama to display some of the passion and soaring rhetoric that made the Rev. Martin Luther King Jr., who would have turned 86 last week, a civil rights legend.

But the messages of restraint Obama has given in response to outcry over police violence are the same ones he has been dispensing for decades, echoes of thoughts he has had since he was a young community organizer in Chicago.

His central tenets: Don’t give in to anger and violence, work to improve not destroy the legal system, and accept that change will come and things are getting better, albeit more slowly than many would like.

Read the full article on the Boston Globe.