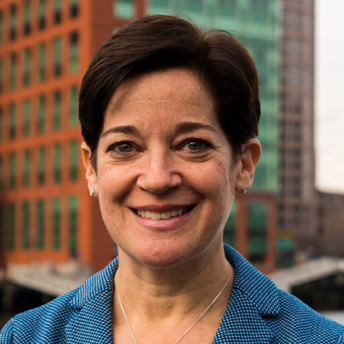 Jumpstart, a national early education organization, announces the appointment of Abby R. Weiss as the organization’s new Chief Program Officer effective January 5, 2015. In this role, Weiss will be responsible for the overall strategy and implementation of Jumpstart’s education research and policy agendas, in addition to working closely with Jumpstart’s National Early Education Council (NEEC) and national board members.

Weiss joins Jumpstart from the Harvard Graduate School of Education where she served as the Associate Director of the Education Redesign Lab, an initiative established by the former Massachusetts Secretary of Education Paul Reville, focused on reimagining a 21st century education system.

Weiss brings over 20 years of experience in education, policy, and research to Jumpstart, having served in diverse sectors including higher education, state government, and non-profit. Recently, Weiss was the Manager of the Massachusetts Child and Youth Readiness Cabinet where she was responsible for the engagement of policy makers, school districts, and communities in aligning policies and resources in a coordinated effort to close achievement gaps. She also served on the Massachusetts Board of Early Education and Care as the Secretary of Education’s designee.

Previously, she served as Executive Director of the Full-service Schools Roundtable where she engaged partners from multiple sectors to advance the Roundtable’s mission of ensuring that every child in Massachusetts has access to integrated services through school-community partnerships. Other roles include Project Manager for the Harvard Family Research Project, Co-Director of the National PIRC Coordination Center, and Associate Director of the Institute for Responsive Education (IRE). Weiss received a Ed.M. from the Harvard Graduate School of Education and a B.A. in Political Science from Brown University.

“Abby is the right person at the right time to lead Jumpstart’s program and policy efforts,” said Jumpstart President and CEO Naila Bolus. “She brings an innovative spirit, grounded in years of practical experience that will position Jumpstart as a thought leader in the national movement for high-quality early education.” Weiss chose to join Jumpstart because of the importance of its mission and the strong track record of its program. “During my career working with schools, school districts, and state government, I have seen what happens when children are not prepared for the K-12 education system,” Weiss said. “Jumpstart is dedicated to making early education matter. Children who are ready for kindergarten have a better chance of success throughout their educational lives. I am thrilled to be joining the Jumpstart team and to be using my experience and excitement to help advance Jumpstart’s ambitious mission and programs.”

Jumpstart is a national early education organization working toward the day every child in America enters kindergarten prepared to succeed. Jumpstart provides language, literacy, and social-emotional programming for preschool children from under-resourced communities and promotes quality early learning for all children. By participating in Jumpstart’s year-long program, children develop the language and literacy skills they need to be ready for school, setting them on a path for lifelong success. Since 1993, Jumpstart has trained 36,000 college students and community volunteers to transform the lives of 76,000 preschool children nationwide. Learn more at jstart.org and follow us on Twitter at @Jumpstartkids.