Reflections of 20 Years of AmeriCorps

During a family vacation this summer, my family visited the Clinton Presidential Center in Little Rock, AR. It was a trip down memory lane for my husband and me – we met in Washington, DC, several years before the 1992 election, and we were each involved with policy initiatives led by the Clinton administration. Of the many memorabilia displays that captivated me, though, was the one devoted to AmeriCorps.

As I looked at the old t-shirts and the places on the map where AmeriCorps has made its mark, I was so proud of Jumpstart’s legacy. I was inspired by the 36,000 Corps members who have served with Jumpstart, making our communities stronger by giving young children an equal opportunity in education.

On Friday, the 20th anniversary of AmeriCorps, I began my day with one of those Corps members – in a parent-teacher conference in my daughter’s 4th grade classroom. Her teacher, Brenna Green, served from 2005-2008 in Washington, DC, and credits Jumpstart with her decision to become a teacher.

We hear so often from former Corps members about the enduring influence of Jumpstart, long after their service has ended. People like Ruby Ditchfield-Agboh, who was part of the first Jumpstart class at Harvard University in 1994. Ruby recalled how the quality time spent in the classroom, reading and interacting with her partner child, Michael, had a significant impact on his development. She served for two more years, and in her final year, became a Jumpstart team leader. 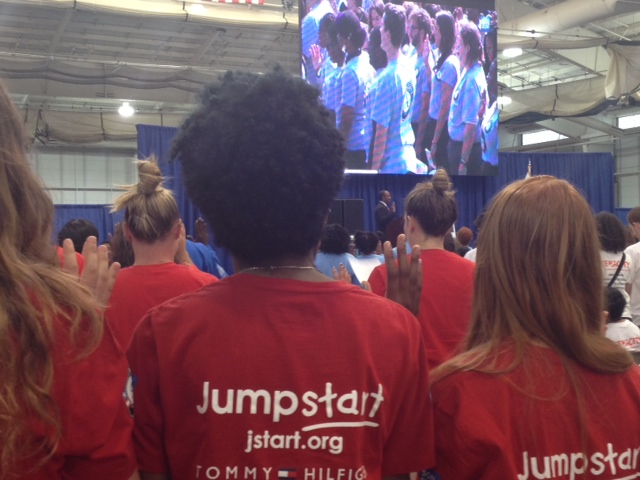 Ruby is now the Network CIO for the New York City Health and Hospitals Corporation where she still utilizes the coaching and feedback that she learned through Jumpstart. Ruby quotes, “Jumpstart made me a better coach. I help staff improve and develop skills, note strengths and areas to improve, and focus on strategies and initiatives to address those areas.”

To this day, Ruby frequently mentions Jumpstart to friends and colleagues and is passionate about the mission and importance of the work that is being done. “Jumpstart had an impact on me personally and I’m proud of how Jumpstart impacts children and families. Now as a parent, it’s even more meaningful”.

I thought about Ruby as President Obama and President Clinton celebrated the anniversary of AmeriCorps on the White House lawn on Friday. In Boston, we gathered at Tufts University, with hundreds of other AmeriCorps members, alums, and supporters, to join in a simulcast of the AmeriCorps Pledge of Service. New Jumpstart Corps members raised their right hand, as Ruby did 20 years ago, and pledged to “get things done for America.”