What It Takes: A Great Start 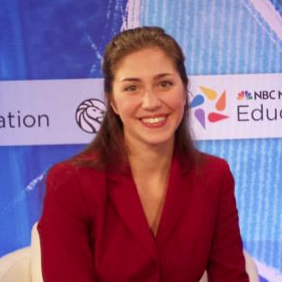 Growing up in the small town of Stonington, Connecticut, I was able to go to a wonderful public school and I never felt as though education was unattainable. I originally went to college determined to be a journalist, a field in which I felt I could tell the stories of others. However, soon I decided to change my major to Elementary Education after joining Jumpstart as a Federal Work-Study job.

I no longer wanted to simply tell people’s stories. I wanted to make a positive impact on their stories. When I walked into the classroom in late October for the first time, expectant children looked to me with gleaming eyes, ready to learn everything and anything I had to offer.

Utilizing Jumpstart’s wonderful curriculum, I felt confident and was able to touch so many children’s lives that year. I soon decided that I could make an impact in the education field because I believe that every child deserves a fighting chance when it comes to education.

After serving on my local Board of Education as the first non-voting student member and after working in my local children’s library, I was ready to do something more. When I was contacted in early September about an opportunity with NBC through Jumpstart, I was eager to get involved. NBC later asked me to join a panel on early childhood education for their three-day Education Nation Summit.

On the panel, What It Takes: A Great Start, I was able to highlight the importance of early education and Jumpstart’s formative role. The panel also featured the Governor of Delaware, the Executive Director of the Office of Early Learning in Delaware, the Vice President of the Urban Investment Group at Goldman Sachs, and the Director of Preschool Services in Salt Lake City’s Granite School District.

During the Summit, I experienced students, educators, policymakers, technology-based enterprises, and the financial sector coming together to improve education. It was inspiring and incredible to see how many people care about the future of education—the corporate sector, school systems, private schools, and technology companies all have the same end goal—but a different view on how they can affect and achieve it. I hope that once I graduate from college I can join the education sector, both shaping the future and doing whatever I can to make a positive change in the lives of many.

Visit NBCNews.com for breaking news, world news, and news about the economy