by Katey Comerford
Katey Comerford is the Executive Director of Jumpstart in Washington, DC where she provides local leadership for Jumpstart. In this post, Katey reflects on the long-time support of former Jumpstart board member Ken Meade. This past weekend Ken passed away very unexpectedly and tragically while on a family vacation in North Carolina. 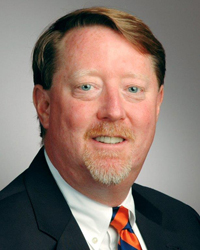 In 2006, when I came to DC from Chicago to expand our program, I was handed a list of names of people who I was assured would be available to shepherd me through the process of building a bigger Jumpstart in the District of Columbia. Ken Meade’s name was at the top of that list, and it didn’t take long for me to understand why. I quickly found out that Ken’s history with Jumpstart DC was almost as long as the existence of Jumpstart DC and that his generosity was matched only by his excitement for the potential of our work. As an early convener of supporters for the expansion of Jumpstart to Washington, DC, Ken’s passion for our work and the impact we could make on the District was unwavering. His interest in Jumpstart started in 1999 with a unique partnership between Hale & Dorr (now WilmerHale) and Jumpstart called “The Youth in Education Initiative,” but Ken soon adopted Jumpstart into his personal cadre of causes.

Ken held a leadership role in the start-up advisory board for Jumpstart DC that carried on for many years. He sat on the National Board of Directors for five years starting in 2004, but was actively engaged in Jumpstart’s promotion for over 14 years. His perspective on community involvement and support of Jumpstart is best summed up in his testimony to Congress in 2003 at the “Voices for AmeriCorps: 100 Hours of National Service Testimony” convened by the Voices for National Service (formerly the Save AmeriCorps Coalition):

“… because there really is no better feeling than knowing at the end of the day when you’re going home that not only have you done what you do in your professional life, but you’re actually making a fundamental difference in the community in which you’re working and living, and to me that is really what it’s all about.”

Ken was a friend, mentor, and cheerleader for Jumpstart. He is survived by his wife, Kathy, and two daughters. We at Jumpstart will be forever grateful for his tireless support, and the efforts he contributed to make Jumpstart what it is today.

Memorial services will be held for Ken on Friday, June 28th at St. George’s Episcopal Church in Arlington, Virginia.