And the Record Breaking Number Is…

The numbers are in! We’ve officially broken the world record for Jumpstart’s Read for the Record® 2012! Jumpstart’s new record for the world’s largest shared reading experience is…2,385,305!!!

We did it! Thanks to you, Jumpstart’s Read for the Record has been our most successful campaign to date. Through your support, millions of individuals across the country (and around the world), came together for ONE DAY – October 4, 2012 – to read Ladybug Girl and the Bug Squad by David Soman and Jacky Davis to jumpstart a child’s future.

We’re humbled by the outpouring of support and participation in this year’s campaign. From scores of individual reading celebrations in classrooms, libraries and community centers to readings on national television, including NBC’s TODAY Show, the world joined a movement to demand high-quality early education for all children.

Special thanks to our national campaign sponsors for their dedication and commitment to Jumpstart’s Read for the Record – we couldn’t do it without them: Penguin; AOL Impact; Comcast; Franklin Templeton Investments; Groupon; Gymboree Play & Music; Lakeshore Learning Materials; Sprout; Tickets for Charity; Tommy Hilfiger; Univision and more. We also appreciate all of our reading partners for celebrating the campaign in their local communities. 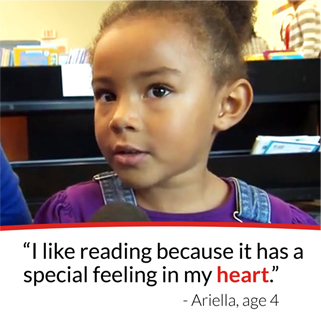 Jumpstart’s Read for the Record is not only a record-breaking campaign, but more importantly, it’s an opportunity to expose children to activities that encourage a love of learning and sense of wonder about the world. One of my favorite stories from this year’s campaign came from Ariella, a four-year old from New Haven, CT, who told us she likes reading because “it has a special feeling in [her] heart.” I melted when I heard her story because it’s a true testament to the impact of our campaign.

Since developing connections at Jumpstart is so important to us, we’d love to hear how you celebrated the record-breaking day. Share your Read for the Record story for the chance to be featured on our blog.

We can’t thank you enough for your participation in Read for the Record. We came together to read, and we took an important first step toward giving children the “jumpstart” they need to reach their full potential. We look forward to celebrating with you next year!